Find the door to the Palace of Apollo and go in. Apollo will ignore you until you cause some trouble. Either attack Apollo or the guard standing by the door. Apollo will get angry and send you to the dungeon.

Bang on the walls and Helios in the cell next to you will wake up. He’ll tell you about a secret passage and give you a Torch and a few Blast Jars. Use them to break through the wall. Follow the passage down until you find a Knife and Bottle Shadows. Climb up the ladder and make your way through the tunnel to the left to the area where the other prisoners are being held.

This is a good time to use the Bottled Shadows. The Sentries and Soldiers won’t be able to see you so you can release all of the prisoners unharmed. When the prisoners see you they’ll run out and help you fight the enemy.

To the top left of the dungeon you’ll find all of your equipment. It’s not too difficult to get to and you’ll only be facing regular soldiers along the way. Up here you’ll also find the Dungeon Key. You’ll need it to escape.

Make your way across to the right side of the map and use the Dungeon Key to open the sealed door. Guarding the exit is a Cyclops. He’s actually pretty easy to kill with right weapon. Use a powerful ranged weapon and target his eye. 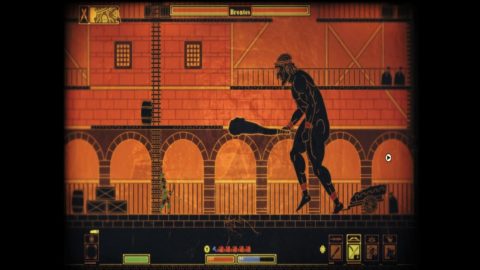 Once he’s been defeated go through the door to the Palace of Apollo.

When you go through the door to the Palace of Apollo Helios will greet you. He tells you that if you want to defeat Apollo you’ll need to weaken him first by finding the Nymph Daphne, releasing the fiery stallions and killing Apollo’s lieutenants.

At the bottom of the Servant’s Quarter’s is a sealed door. Open the chute to the right with a Lockpick and shoot an arrow down the chute to open the door. Behind the door is a Chest with the Earth-Shaker’s Hammer.

This is an easy mission if you use the Bottled Shadows, which I highly recommend. Simply take a sip of the potion and run as quickly as possible to where the steeds are tied up. Pull the lever to release them. When the potion starts to run out take another drink. There are four steeds to free. When you release the last one the objective will be complete. Quickly make your way out of the stables and back to the palace.

Daphne can be found in the Garden of Light towards the top of the Palace of Apollo. When you enter you won’t know where Daphne is. She’s been turned into a tree and is located at the center top portion of the garden. When you find her she cries out for water. Defeat all the guards in the area and grab a jar of water. There’s a few of them around and they respawn when you pick one up.

Take the vase of water and smash it over Daphne. You’ll need to do this three times before she’s back at full health. Along the way the statues will come to life and start attacking you. They’re pretty easy to kill, mainly because they’re so slow.

When you heal her Daphne will give you a Sun Disc. This is a shield that emits light. It will be very useful when facing Apollo.

The Guardhouse can be found towards the top right side of the palace. Enter and get ready to fight Apollo’s lieutenants. There are three Captains and they’re a little larger then the regular soldiers. They may try and plant Sentries on the ground while you’re fighting. Try to use large weapons to bash through their shields first and then take them out. Once you’ve killed all three of them return to the Palace of Apollo.

When all three objectives are complete the door to the Stoa of Apollo will be unsealed. Go through the door and run to the left to face Apollo. When you find him he’ll turn off all the lights. Luckily you have the Sun Disc from Daphne to still give you a little light.

Apollo will teleport in front and behind you while throwing out Blast Jars. It’s difficult to catch up with him so use your ranged weapons to take him out. Once he’s been defeated pick up the Lyre of Apollo and you’ll be taken back to The Agora.