GDI 7 – Finish the NOD Base

Unfortunately you didn’t get your orders right in the last mission. You were supposed to destroy the NOD Base. Now we need to go back and finish it off but the NOD have more defences this time.

As soon as you land on shore you’ll be attacked by Flamethrowers and NOD Buggies. Keep your Infantry separated so that don’t all immediately get flamed to death.

In a little while your MCV will arrive. Send it a little way to the north, nearer to the Tiberium field and start building your base. You won’t have long before the attacks start coming so build a Guard Tower to the north and one to the south-east of your base, as near to the rocks as you can.

Soon the Tiberium just to the north of your base will run out. There is a larger Tiberium field further to the north but it’s less protected and will face constant streams of NOD Rocket Infantry. To combat this place 3 or 4 Hum-vees on the eastern edge of the Tiberium field to mow down any infantry. NOD have also placed a couple of Rocket Infantry on the north western edge of the field to to shots at your harvester. Cheeky buggers! 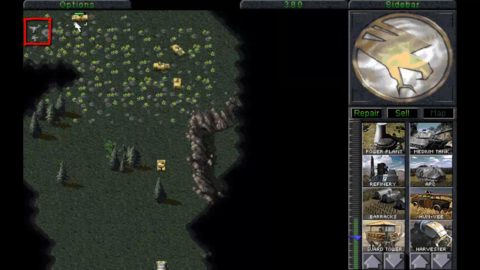 You’ll definitely want to build a second Refinery to speed up the harvesting of Tiberium. Build up your forces and place them in the center of the map. The NOD Base is to the east and a little bit north. It’s protected by three Turrets and a bunch of Infantry walking backwards and forwards.

Tactic 1: Build an APC with 3 or so Engineers. Send out a strike force ahead of the APC into the NOD Base to confound the enemy and act as a distraction. Quickly send your APC into the base while the battle is raging and take over the Construction Yard which is in the south-eastern corner of the base. You’ll also want control of the Hand of NOD and any other buildings you can get your hands on.

Tactic 2: Send a fairly large strike force of Grenadiers to take out all the Infantry and Gun Turrets. Once that’s clear send in the Hum-vees and Medium Tanks to destroy the Hand of NOD and Construction Yard.

Both tactics will work. Once you’re done clean up the remaining structures and units to finish the mission. There is a SAM Site south of the base on a hill and west of the base near to another Tiberium field. The last 2 SAM Sites are inside the base itself on the southern side.

With all the NOD structures and units destroyed you will win the mission.

Next: GDI Mission 8 – Restore GDI Presence Near Salzburg or Protect Mobius in Bratislavia