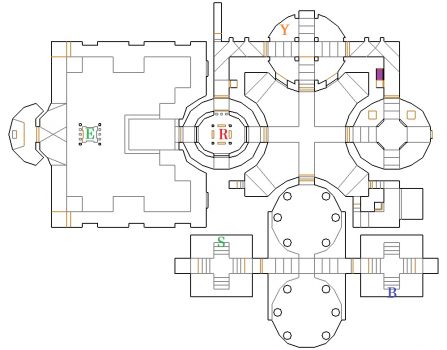 From the Start walk down to the center of the room and open the wall to the left for the Green Armor. Open the wall opposite and then the door behind it.

Take out all the smaller enemies but try to conserve your ammo. This room is shaped like two connected circles. The door to the east is locked but you can open the wall to the north.

From this courtyard it looks like there are many places to go but most of them are locked. Watch out for the enemies behind the barred windows.

Start by going through the door in the corner to the right (south-east corner). Walk around the dark passage and press on the corner pillar. This will lower down revealing a SoulSphere. A room behind you opens up with Blue Armor and a few smaller enemies.

Head back to the courtyard and go through the door to the north. When you move forwards the walls to the left and right will lower down. If you haven’t shot the enemies through the windows you’ll be exposed now. There’s also a Cacodemon on the other side of the steps. 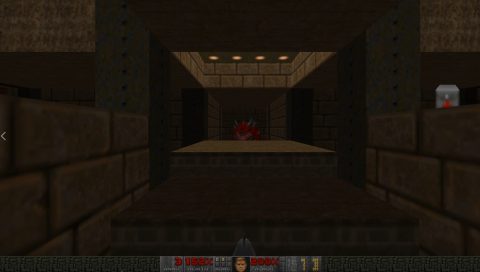 Open the door to the left and Walk down the corridor. A Revenant and a few Imps will teleport in behind you. At the end of the corridor look for a panel on the left with a cross design on it. Open it up and press the Switch. This lowers down a wall in the previous room where you’ll find the Yellow Key and Rocket Launcher.

Now that you have the Yellow Key you can open the Yellow Door to the east. Follow the corridor around and once again look for the panel on the wall to the right with a cross design on it. Open it up, press the Switch and grab the MegaSphere for the only Secret for this level.

Open the Yellow Door at the end of the corridor. When you enter the Hell knight will teleport behind you so be careful. Once this room is clear press the Skull Button. 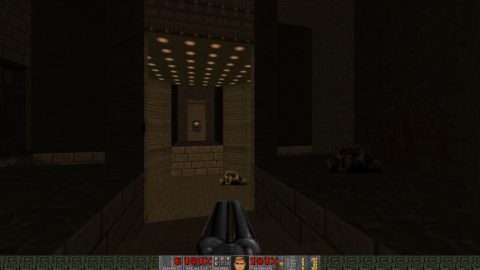 This takes you to a room opposite the starting room and it looks just the same. Grab the Blue Key, open the door to the west and then go north back to the courtyard.

Open the Blue Door to the west and take out the enemies around the edges of this circular room. Don’t open the interior yet because there’s an Arch Vile in the center. The Arch Vile won’t resurrect anyone while he’s stuck in the center cage so take him out and then open the pillars so you can grab the Red Key.

When you press on the pillar with the face on the western side the door to the outdoor area to the west also opens. 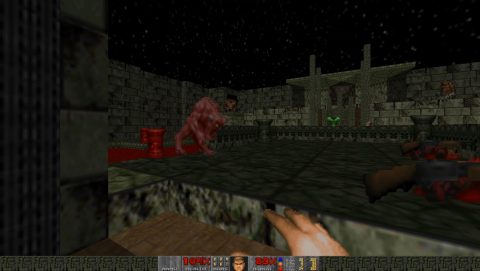 Take out the enemies and grab the Green Armor if you need it. There are two lifts, one in the far left corner and one in the far right corner. Take either one up and open the door in the center. Take out the Revenant and then the Barons of Hell.

Step forwards into the room and a Skull Button will lift up. Press it to lower the bars behind you. Run across to the silver teleporter pads for the level Exit.