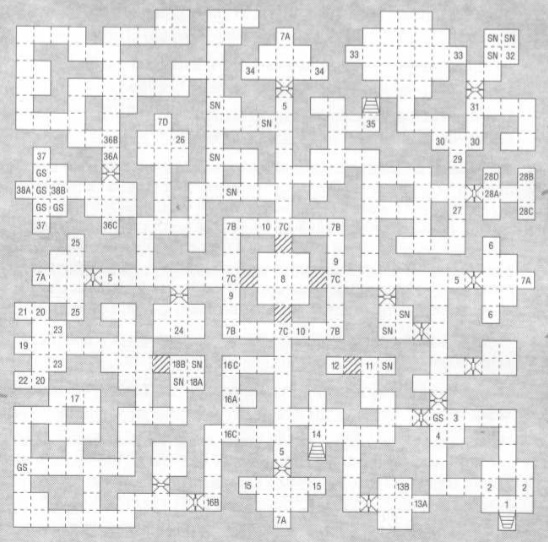 Spirit Nagas and Banshees roam level 3 of Lathander’s Temple. Spirit Nagas are poisonous but otherwise pose little threat. Banshees can only be damaged by magic weapons +1 or greater and are immune to cold and lightning based spells.

Once you reach this level any food items you have in your inventory will become rotten. You also won’t be able to rest as your dreams are filled with nightmarish visions.

2) The plaque on the wall says “Be welcome friends, and partake of Lathander’s bounty.”

3) Press the Button to open the door to the north.

4) Press the Button to open the door to the west.

6) When you read the plaque at these locations an explosion will hit the party. The plaque reads “The eternal light of hope fuels the beacons of sanctuary. May all enjoy their benevolence.”

7A-D) Place the Embers of Hope into the beacons found at 7A. This causes Chalices to appear at 7B and the Key of Faith to appear at 7D. Place all the Chalices into the niches in the walls and the walls at 7C will disappear, giving you access to Lathander’s Bounty.

8) Lathander’s Bounty. When you eat of the feast all your wounds will be healed and you’ll be fed. It also gives you the effects of a Bless Spell. An Ember of Hope lies on the floor.

9) The plaque reads “The cups of good cheer bring forth the heroe’s feast.” Reading it causes a nearby explosion.

10) The plaque reads “Sustenance for the body and spirit are freely given within the walls of this temple.”

13A-B) A Statue of Lathander is at 13A. Touching it heals the party and causes a Copper Key to appear at 13B.

15) The plaque reads “The smallest of embers can ignite hope eternal.” When you look at the plaque and explosion hits the party.

18A-B) Press the Secret Button at 18A to make the west wall at 18B disappear.

19) On the west wall you’ll find a censer. Burn some Incense in the censer to heal the party.

20) Ice Storms hit the party when you stand on the invisible Pressure Plates. Throw an item at the Lever to turn the trap off before standing on the pressure plates.

23) The plaque reads “May the sweet air of Lathander’s temple give you respite from your pain.”

24) Three Banshees. One of them drops a Copper Key when killed.

25) The plaque reads “While yet the beacons burn, the key to passing into darkness without fear is faith.” When you read the plaque an explosion hits the party.

27) Press the Button to open the door to the east.

28A-D) When you step at 28A the door closes behind you and two Banshees appear from 28B and 28C. One of them drops an Iron Key when killed. At 28B you’ll find a Halberd +4 and a Potion of Healing. Use an Iron Key at 28D to open the door to the west.

29) The plaque on the wall reads “Have faith in what you see.”

30) The pits here are illusions and you can safely walk over them.

31) Press the Button on the west wall to open the door to the north.

32) Copper Key and Bag of Incense.

34) The plaque says “Faith is found on the alter of devotion.” When you read the plaque an explosion hits the party.

37) The plaque reads “Faith must go before all good souls.”