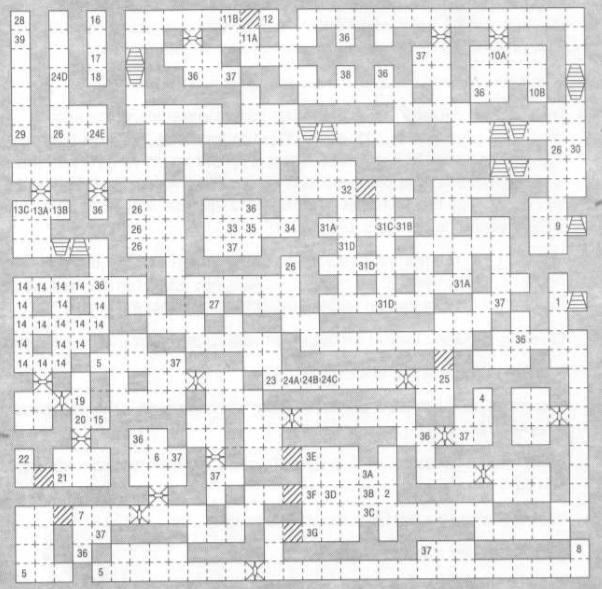 Wights and Shadows inhabit this level of the Warriors Tomb. They are fairly easy to defeat but not without their dangers. If a Wight does manage to hit you it can drain your levels. Keep away at all costs. Shadows also have a draining attack but drain Strength instead of levels. Shadows can only be hit with magical weapons +1 or greater.

On this level you’ll find your first NPC companion, a dwarf called Isharn. He’s a level 8/8 Fighter/Thief with high Constitution and decent Strength. He makes a good front line fighter if you’re lacking hardy characters in your starting party.

2) The plaque on the wall reads “For each path that may be taken another surely shall be given.”

4) A Trident +3 called Revko, a Cleric Scroll of Cure Serious Wounds and a Ration.

5) One of the three Rod Fragments.

6) A Potion of Giant Strength, a Mage Scroll of Fireball and a Ration.

7) Press the Secret Button to open the wall to the west.

8) A Mage Scroll of Fireball and 2 Rations.

10A-B) A poison trap. When you step at 10A the door closes behind you and the room fills with poison. Pulling the Lever at 10B opens the door again and removes the gas.

11A-B) Pressing the Secret Button at either 11A or 11B opens up the alcove to the east.

14) The floor here is covered in a slimy mush that makes movement more difficult.

15) The plaque says “Press button for service.” When you press the Button a pit opens up underneath you and drops you down to location 16.

16) This is where you land when you fall down the pit at location 15.

19) The destination of the teleporter at 18.

21) Press the Secret Button to open the passage to the west.

22) This is the crypt of Captain FFlar. Take the Nameplate from his drawer. You’ll need it later when you encounter the captain.

23) The plaque reads “The spirit moves in mysterious ways.”

25) Captain Fflar is here. If you have his nameplate you can show it to him and he’ll give you ua Medallion of Friendship. If you haven’t found the nameplate he’ll attack. The Secret Button opens a passage to the north.

26) A closed crypt. Keep it closed otherwise monsters will periodically spawn from here.

27) When you press the Button a pit opens up underneath you, dropping you down to 28.

29) Stepping into the teleporter takes you to location 30.

30) The destination of the teleporter at 29.

31A-D) The plaque on the wall reads “Halt! Do not touch!” You should heed this warning. If you flip the Lever all metal items will be removed from the party and transported to 31B. Four Shadows will also appear next to you and attack. Flip the Lever back down again to remove the glass barrier at 311C and give you access to your items. Wooden Clubs can be found at 31D.

32) The Secret Button opens a passageway to the east.

33) Place the three Rod Fragments and the Rod Orb into the slots in the stone arch. It looks similar to the stone portals of the previous games. When you place the four items a plaque appears on the wall at 34.

34) The plaque reads “Faith restoreth the soul.” When you click on the plaque the Rod of Restoration appears at 35.

35) Rod of Restoration. This rod can be used to restore any characters who have lost levels to Wight attacks.

38) When you press the Button a pit opens underneath you, dropping you to location 39.