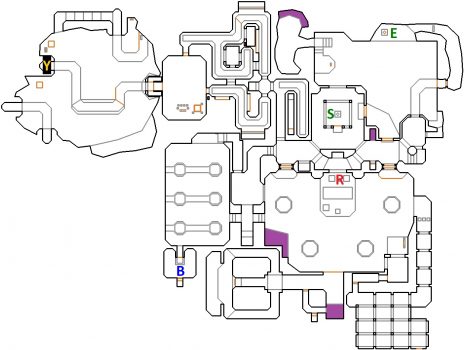 From the Start take the lift down to a corridor with Health Bonuses. This is a bit of a hub area with corridors and doors heading off in various directions. I like to clear out the area to the northeast of enemies first before coming back to the Starting corridor.

The room to the south has the Red Key. You’ll be able to see it through a window but won’t be able to reach it yet. Make your way around to the west and drop down a hole. You’ll see a line of Chaingunners in front of barrels. Don’t shoot! 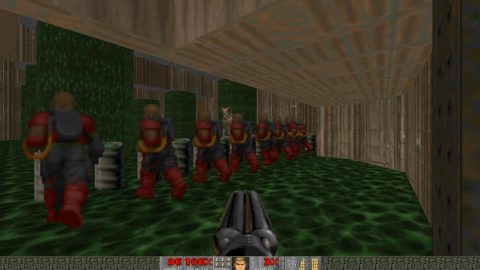 Wait for the Baron of Hell to try to shoot you. He’ll explode the barrels and kill all of the Chaingunners.

Go through the passage to the south for the Blue Key. When you grab it the lift will lower and you’ll be in a small room with Shotgun Guys. Quickly take them out and flip the Switch to reveal another teleporter. Step into it and drop down the hole. You’ll end up back near the starting corridor.

You can go through the Blue Door now but you’ll need the Yellow Key as well. So instead make your way north through a narrow corridor. This is a bit of a maze with Chaingunners hidden all around the place.

Make your way around the corridors to a Switch. Hit it to open up a doo to the rectangular room to the west. Take out the Imps and then drop down the lift to the west. Watch out for Chaingunners to the left and right.

Take out the Pain Elementals and drop down into the slime pool to the left. 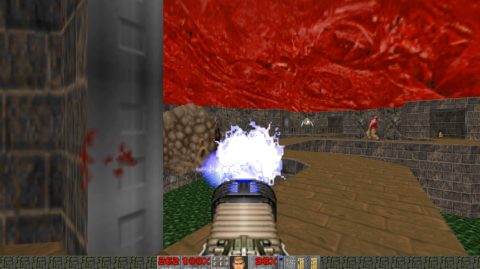 From here you’ll be able to get a foothold in this room as you take out the Shotgun Guys, Arachnotrons, Revenants and Baron of Hell.

Drop down to the slime, press the Switch to reset the lift and take the teleporter back up to the rectangular room. Make your way back to the Starting corridor. More Chaingunners will have been released along the way.

Open the Blue Door to the large slime room and kill the Arachnotron. When you walk to the other side of the room Mancubus will be released from the pillars. 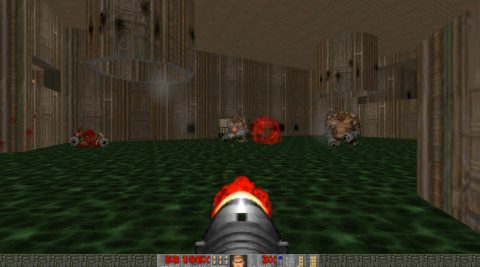 Go through the passage to the south and open the secret wall with no slime at its base. This is Secret #1 which leads to a small room with a Rocket Launcher.

Inside the secret corridor open the wall to the south to reveal a teleporter. Go through it for Secret #2. You’ll be on a ledge back in the slime room with the pillars. Drop down and pass back through the Blue Door. When you do an alcove just to the west of the Blue Door opens for a few seconds. Step into the teleporter to be taken to Secret #3 with a box of rockets and other goodies. Drop back down to the Blue Door.

Press the Switch which is now unlocked and then step into the red teleporter. You’ll be taken to a platform in the slime room. Step back off the platform as the Barons of Hell and Arch Vile teleport in and carefully shoot them down. 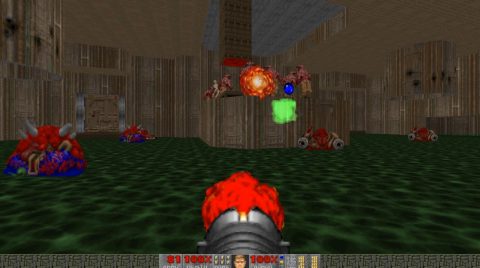 Once the enemies have been killed go back through the teleporter in the rectangular room and this time grab the Soul Sphere and Red Key.

Drop back down, go through the Blue Door and then the Red Door. Kill any enemies in this room and walk up the stairs. Press the Switch on the closest side to open up the Exit but also the Switch on the other side. This opens up Secret #4 just inside the cave.

From here go back and then take the stairs up to the walkway. Follow it around to the level Exit.