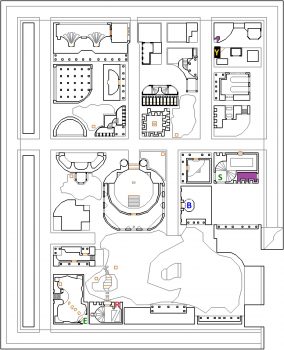 Odyssey of Noises is a large city map with lots of buildings to explore. You’ll need to find the three keys before getting access to the level Exit.

From the Start go down the stairs and head out into the streets. Take a few loops around the buildings to snipe off any enemies you can see. Be careful of the Cyberdemon in the lava crater to the south.

In the south west you’ll find a building with three pillars at its entrance. Go through and head up the stairs. From here you’ll need to make a dash up the pillars to the building to the south. 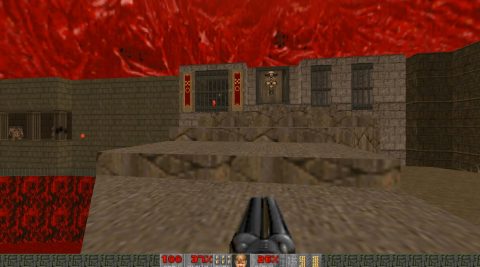 Open the door to the left to reveal the Red Key. When you grab it an alcove opens with an Arch Vile. Kill it and hit the Button behind it. This Button lowers the Red Bars elsewhere.

Make your way back to the building where you started. By now Secret #1 will have opened up. There’s an entrance to the building on the eastern side with an Energy Cell Pack.

Go to the building to the north of the one where you started and head up the stairs. Make your way to the north and dash across the gap to the next building. Dash through the window to the north to the third building. The Yellow Key will be on some steps in the corner to your left. 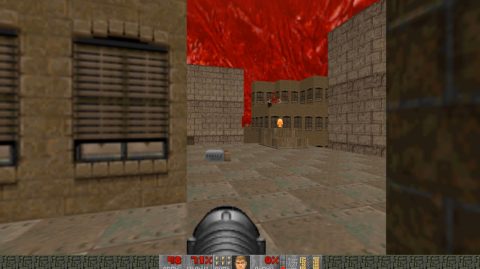 For the second secret for this level stand on the steps with the Yellow Key and dash across to the small opening in the corner of the building to the north. This is Secret #2 and contains a Megasphere.

Go to the northwestern block of buildings and open the Yellow Door on the eastern building. Kill the 2 Revenants and press the Skull Button. This remove the bars blocking access to the Blue Key.

Make your way down the main street to the south towards the lava crater. Open the door closest to the crater on the eastern side for the Blue Key. Watch out for the Chaingunners outside the door in the windows.

Open the door and hit the two Skull Buttons. Hiding in the far corner you’ll find a Baron of Hell with a Soul Sphere. Drop back down to the street.

In the very southwest corner of the map you’ll see a dark brown building. Go up the stairs and take out the Arch Viles in the corners. Dash across the red pillars to the level Exit. The pillars will lower as you dash across them so don’t stop until you’ve made it across.