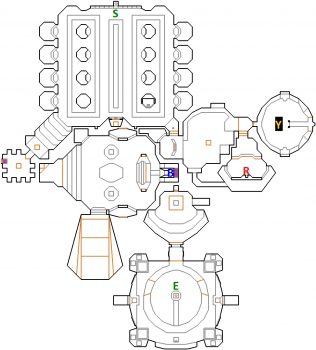 From the Start you’ll be in a large room. Kill the Cacodemon in front of you and the Specters hiding around the pillars on the outskirts of this room. Head towards the Shotgun in the southwest corner and you’ll drop down to a small room below. Kill the Demons and press on the wall to the right to lower down a lift. This is Secret 1 with a Soul Sphere. 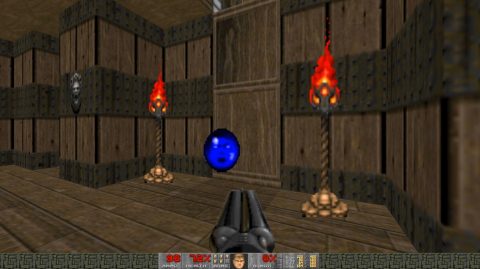 Grab it and then head through the teleporter in the center of the room. You’ll be taken to another fairly large room with Demons and Revenants. Watch out for the crushers on either side that will activate once you get close to them.

Press the Buttons on either side on the far platform to lower down the Blue Key. Grab it and press the Face Button behind it. Quickly run back and grab the Invulnerability from the room that just opened up. 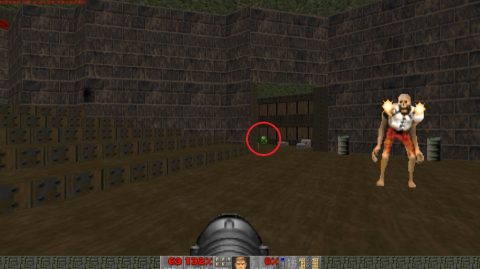 Now that you’re invincible you can use Rockets to kill all the enemies that spawn into the room. Once the room is clear head up the steps to the platform and dash across on either side of where you picked up the Blue Key. Behind it is Secret 2 with a Health Pack and some Ammo.

When you’re done with this room take the teleporter back and go up the lift to the Starting room. Go through the Blue Door in the southeast corner.

Take out the enemies in the cages and the Cacodemons floating about. Pressing the Switch will lift up a walkway so you can get to the other side of the room. Walk across it and open the thin door next to the Yellow Door.

Take out the enemies and head up the steps. Run across the walkway so you land on the Yellow Key. When you open the thin door to get out you’ll noticed more enemies have been released on the other side of the room.

Go through the Yellow Door, kill the Imps and Arachnotron and grab the Red Key. The walls on the side will open releasing Chaingunners.

You should have all the keys so head back to the Starting room. An Arch Vile will have appeared in the pillar in front of you. Take him out and then clear the room of Imps.

Open the colored pillars on the southern end of the room and go through the silver eleporter. You’ll be in a room with Barons of Hell, Hell Knights and Cacodemons. Use the Plasma Gun or BFG to take them out quickly.

Open the door to the north for a Soul Sphere and then go through the door to the south. There are a lot of enemies all around this circular room so you’ll need to find a foothold somewhere. You’ll find you can hide fairly well in the alcove on the left side once the Imps have been taken out. 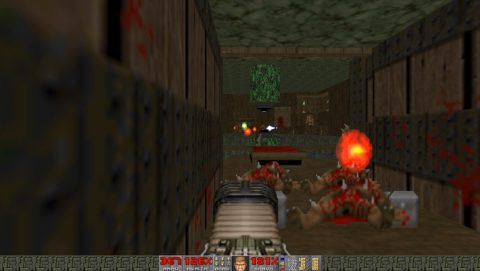 Once the room is clear press the Switch on the south side of the circle. This will raise up a walkway with Imps and the Exit teleporter. Go through it to complete the level.