The Streets of Polysorbate XL

After the cut-scene Roger finds himself half embedded in the road. Wait for the robot to walk past from right to left and use the Hand icon on it as it gets close. Roger will grab onto it and pull himself out of the hole. Look closely at the bike to the right. Grab the ID Card that’s hanging from it.

There are some events that take place randomly while you’re walking around the streets. As you walk around keep an eye out for the Photo Booth. When you see it use the Buckazoid from your inventory on the Photo Booth to take a picture.

Open your inventory and use the Photos on the ID Card to make your own Fake ID. While you’re wandering around the streets enter the Arcade and talk to the big alien leaning on the arcade machine. Have a game with him but you can’t win at the moment.

Leave the Arcade and continue wandering around until you see a man wearing a trenchcoat. Speak with him twice to find out he’s an Endodroid Runner. He gives you a Datacorder so Roger can help track down his target.

Enter the Orion’s Bar and walk all the way to the right. Use the Feet icon on the door to the very right 2 or 3 times and Roger will kick it in. The Endodroid is in the basement but he’s not a happy chappy. Grab the Metal Bar from the ground and then get out of there.

Walk up the stairs back to the bar and then take the lift up to the second floor. On the left are a few guys having a good time. Show them your Fake ID and they’ll get scared and leave. Grab the Hookah Hoses and the Nitro Tank under the table. Drag the Nitro over to the conduit in the corner just to the right. Go into your inventory and use the Hand icon on the Hookah Hoses to untangle them.

Head down the lift to the bar and show your Fake ID to the bartender. Order the ‘Special’ and he’ll go off to make it. Quickly go behind the bar and open the fridge. Take out the Ice Tray and close the fridge door. Use the Hand icon on the valves to the right. Find the one that doesn’t spray water and use the Hand icon just below it to break the pipe. Use the Hookah Hose on the pipe to the left and attach it to the pipe you just broke. 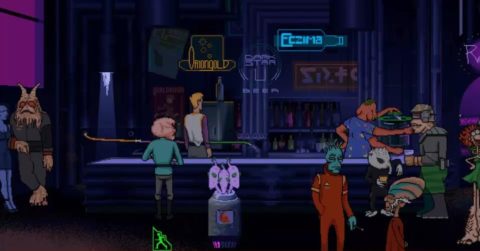 Head back upstairs and turn on the Nitro using the Hand icon. Take the lift back down and go to the basement. The Endodroid should be frozen solid. Use the Metal Bar on the Endodroid to break it into pieces. Use the Dust Pan to sweep up the pieces and then use the Dust Pan on the Ice Tray to put the blocks into the tray.

If you want a few extra points go back to the bar and place the Ice Tray in the freezer. Take the Ice Tray out again for a Well-Frozen Endodroid. Leave the bar and find the Endodroid Runner again. Talk to him for your payment of 50 Buckazoids.

Once again wander around the streets until you meet a drunk man. This is none other than the infamous Elmo Pug who was the CEO of ScumSoft back in Space Quest 3! Talk to him and you’ll make a deal to give him some Coldsordian Brandy in Exchange for a Stooge Fighter Cheat Sheet.

It’s time to get revenge on that Djhurkwad at the Arcade. Go to the Arcade and challenge him to a game. When you are selecting a character press the buttons in this order (ABBACACA). This will open up a panel with a super special move. Use it to defeat your opponent and win 300 Buckazoids.

Lastly, head to the Dew Beam Inn and talk to the manager. Give him the Buckazoids for a room and he’ll hand you the Keycard. Use the elevator button to go up to your floor and use the Keycard on the door to your room. The two thugs from the lobby will show up and kidnap you!