You begin the game somewhere in North America. There are no towns nearby and you have very little food, no weapons and no armour. 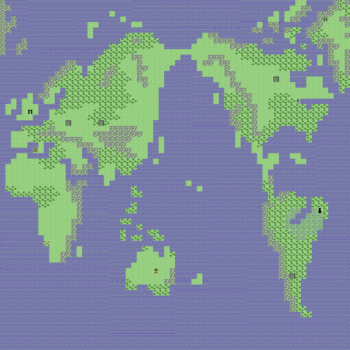 Head northwest, across the Bering Straight and west to Europe. In the south of Italy you’ll find Town Linde. Stop in here and buy the best weapon and armour that your agility and strength will allow. See the Character Creation page for a list of all the weapons and armour in the game.

Leave the town and make your way to the south of Africa. You’ll see a small village here, the Village of Le Jester. Enter the village and go to Alfred’s Fish and Chips. Buy as much food as you can. Don’t worry about anything else for now.

With a good stock of food in your inventory wander around the overworld and fight with any enemies who approach. Each time you kill someone you’ll get Gold and maybe an item.

To increase your Hit Points go through the Time Gate to the northeast of Town Linde. This takes you to Britain in 1990 AD. From here you can visit Lord British in his castle and give him a Gold tribute. Initially he’ll give you 300 HP for 50 Gold but that will fall off as you increase your HP.

Go back through the Time Gate and continue killing enemies to collect as much gold as you can.

If you notice a Pirate Ship in the ocean don’t attack it. You can take over the ship if you have a Blue Tassle. These are sometimes dropped by Thieves when you kill them. They have a 1 in 17 chance of dropping a Blue Tassle so you may need to kill a few of them before you find one.

Once you have a Blue Tassle go up to a Pirate Ship and Board it. The crew will accept you as their new leader. While you’re on a ship you won’t consume any food and you can travel over the entire world.

Continue killing enemies until you have about 1200 Gold. You’ll want the same amount of food and HP, 1200 Food Rations and 1200 Hit Points. Now you’re ready to leave this time period for good.