If you came here by the Time Gate in Europe 1423 BC then you’ll arrive in Britain. The Castle of Lord British is nearby and you can offer him Gold to increase your Hit Points. The villiage of Port Bonifice is just nearby to the northwest if you need to buy some food. 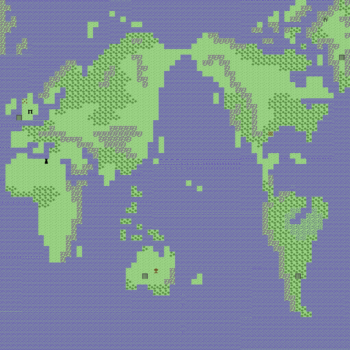 There’s only one way to increase your stats in Ultima 2. To do so you’ll need go to New San Antonio and pay the clerk in Hotel California gold. For each 100 gold that you give him there’s a chance that he’ll randomly increase one of your stats by 4.

Getting to New San Antonio is tricky if you don’t yet have a ship in this age. If you have a Blue Tassle keep an eye out for a ship, otherwise you’ll need to take a series of Time Gates to get to the mainland.

Once you have a ship this process will be much easier and you can travel around the entire map without needing to use the Time Gates.

Give the Clerk at Hotel California 100 gold at a time and he’ll increase one of your stats. If an attribute goes above 99 it will revert back to 0. If any of your attributes goes over 96 stop increasing your stats. 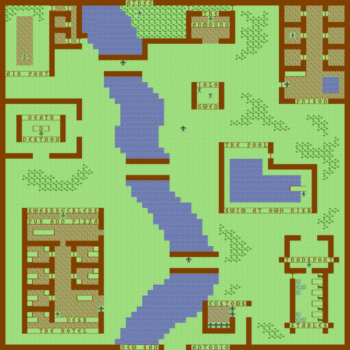 The airport is located in New San Antonio and is blocked by three locked doors. You’ll need to find keys and the only way to get keys is be defeating guards. Each guard you kill drops 2 keys but they’re the toughest enemies in the game.

Now that you’ve upgraded your stats purchase the best weapon and armor that you can. Make sure you have plenty of HP spare and start a fight with one of the guards. Some of the guards are invincible. If the game says the guard is an “amusing” guard then stay away from him. He can’t be killed.

To fly a plane you’ll need a Brass Button and Skull Key. Make sure you have them before trying to take off.

The prisoner in the prison to the northeast of New San Antonio will sell you the Quicksword if you can reach him. You’ll need 2 keys and to defeat a guard along the way. The prisoner, Santre, will be in one of the cells and he doesn’t move around. Open the cell door and offer to buy the Quicksword for 500 gold.

By now you should be tough enough to venture into any of the towers or dungeons. It’s not essential to visit any of them although you can find the rare Tri-lithium which you’ll need to power a rocket later.

Exploring towers and dungeons are easiest if you’re a Cleric because they have lots of spells to help out and can immediately teleport to the entrance. Wizards also have useful for dungeons. Fighters and Thieves will have the hardest time navigating through these areas and you’ll need to make sure you have a store of Torches and Tools before going inside. Wizards and Clerics can cast the Light spell.

When you are done with this age make your way up to the Time Gate in Greenland. Go through to enter the Pangea Age.