The Dead Rise as Quel’Thalas Falls 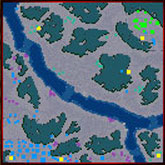 There are two entrances to your base, west and south. You only seem to be attacked from the west so keep your units on that side.

You have enough resources to in the starting base to keep you going for a while so build a couple of Barracks and start producing Knights. I like to construct a few Towers on the western entrance to help fend off the Elves.

There is another Gold Mine on the eastern side of the large forest just to the south and another one in the very south east corner. The Elves usually don’t spot either of these positions but you may want a few soldier to protect your Peons just in case.

There are three ice bridges over the river. If you hold these bridges your base will be safe from enemy attacks.

To complete the mission you will need to clear out the entire map. There are the blue humans to the south and teal Elves dotted around the map. Only the blue enemy base will build more units.

Given the prevalence of Gold Mines I found it easiest just to train large groups of Knights. Send them into the enemy base to wipe out everything in their path. Once the map is clear the mission will be a success.

Back: The Destruction of Stratholme          Next: The Tomb of Sargeras