The Awakening of Stormrage

Outside of the Sacred Moonglade Tyrande must go in search of  Cenarius’ Horn in order to awaken the Druids. Time is limited in this mission so you’ll need to move fast. You’ll need to fight your way past the Orc base before the Undead chop down the forest and find the Barrow Dens. The Undead need to chop down 100 trees which gives you 3 or 4 days to complete this chapter.

Furion Stormrage – Find the Moonglade Isle, slay the Guardians and reach the Horn of Cenarius before the Undead find Furion.

Healing Wards – In a crate in the Orc base.

Boots of Speed – can be found in a Murloc hut.

Jade Ring – Near to the first Primal Guardian outside of a cave.

Anti-Magic Potion – In a crate near to the Horn of Cenarius.

The Awakening of Stormrage Walkthrough

In this chapter you’re able to build Dryads who have a magic ranged attack that poisons and slows the enemy. They’re also immune to magic which makes them quite powerful units.

There’s a second mine to the east of your main base. You’ll definitely want to set up another base here to speed up production of troops. 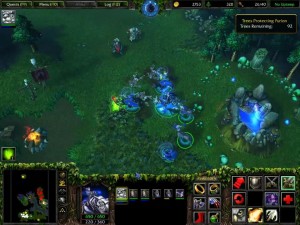 There is a Fountain of Healing just to the south of the Orc base which makes it easy to position units there and attack while being healed at the same time.

Set up some Ancient Protectors near to this Fountain so you can ambush any units that try to make their way down.

Once you have the Fountain secure build some Ballista and push north into the Orc base. You don’t need to destroy the whole base just make sure they can’t produce any more Peons or they will start to rebuild.

The Primal Guardians are no joke and will take a sizable force to defeat. You should be ready to start attacking the Guardians with about 40 trees remaining. Continue producing units to replenish the ones that die as you progress through the Moonglade. If you have time bring your Ancient Protectors with you. 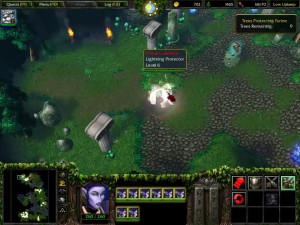 Draw out the Primal Guardians first and lead them back into an ambush. Once they have been killed destroy the Protectors as they do not move. There is the Fire Protector, the Ice Protector and finally the Lightning Protector.

Once the Lightning Protector has been defeated you’ll find the Horn which summons Furion Stormrage and ends the chapter.

Continue on to Chapter 4: The Druids Arise.