Twilight of the Gods

This is the last chapter of Reign of Chaos and probably the most difficult of the game. You’ll have a limited amount of time in which to protect the World Tree. The Humans and Orcs are working together with you on this one but you’ll need to help defend their bases or you’ll have no chance defending the Tree.

Twilight of the Gods Walkthrough 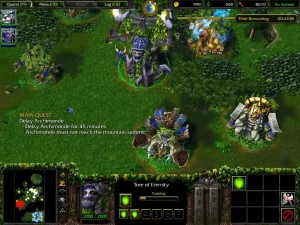 This is a tricky mission and may leave you bewildered if you don’t know how to do it. Your base is to the north, guarding the World Tree. The Humans are to the south and the Orcs to the west. Archimonde will attack from the south west, first rolling through the Humans, then the Orcs and lastly your Night Elf base unless you stop him.

Your base is fairly well established and the last in line so don’t worry about defending it right now. Send all of your forces south to the Human base to keep it standing for as long as possible.

Create Wisps immediately and send them out to build Trees of Life and entangle the two other Gold Mines east and west of your main base. Build at least two more Ancients of Lore when you have the money and start sending Dryads down to help the Humans. 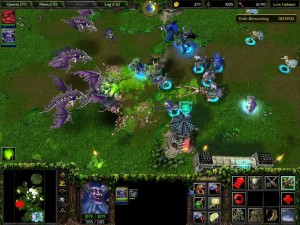 Almost immediately Archimonde will begin sending out his first wave of attack. They’re fairly easy to deal with initially but they get progressively harder and harder until the base falls. Once the Human base falls the Undead will rapidly build a new base in its place and start sending wave after wave against the Orcs. Once the Orcs have been defeated your base is next.

Once the Human base has fallen the waves will begin from the easiest level again, progressively getting harder as before. Many of their attacks are magic attacks which is why Dryads work so well in this mission.

The Human base is fairly weakly defended. There are a couple of Guard Towers but that’s about it. Jaina will help and she has some pretty nifty spells but it really comes down to you to defend the base. 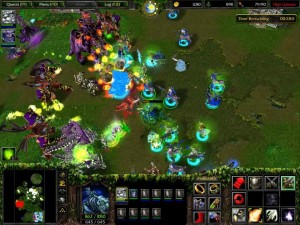 Try to keep your two heroes on the front line. You have two spells that can turn the tide in your favor, Tranquility and Starfall. If you’re taking a battering use Tranquility to heal up your units. For the next big wave cast Starfall to weaken the enemy before they even make contact with you.

Eventually heroes such as Azgalor will be sent against you. Azgalor comes back to life once when killed so don’t relax until you’ve killed him for the second time.

Unless you’re incredibly skilled the Human base will fall eventually. You should be able to hold it off until around the 25 minute remaining mark. While the Undead are rebuilding it fall back and set up your defences near the Orc base. 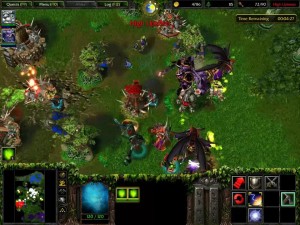 The Undead will take some time setting up their new base. This will give you a chance to organize your defences. Bring your Heroes, Dryads, Druids in Bear Form and any Ancient Protectors you can afford into the Orc base.

The Orcs are a little tougher than the Humans but they can be attacked from two entrances. Just to the south of the Orcs is a Goblin Merchant who sells Goblin Land Mines. If your quick you can run down and purchase these between waves and lay them at the front of the Orc base.

You may be able to hold off the Undead horde until the timer runs out. If not fall back once again and set up your defences outside of your own base. Use mainly Dryads, your two Heroes and possibly a few Druids to tank at the front.

With about 30 seconds remaining Archimonde will stride forwards and destroy anything in his path. This is usually not enough time for him to reach the World Tree unless you’re base is already almost demolished. Hold him off for the remaining few seconds to win the game!