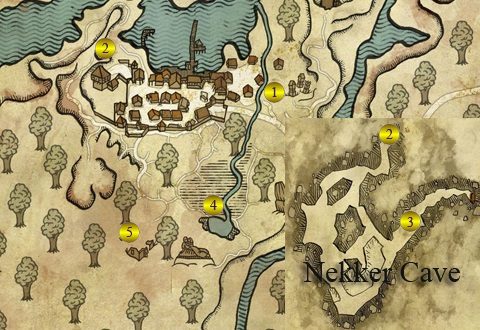 When you approach the area just outside Lobinden (#1) you’ll see an elven girl who’s been captured by Temerian Soldiers. They’re convinced she lured a few of their guards to their death in a cave just outside Flotsam. To solve this issue you’ll need to enter the Cave (#2) yourself and find out what’s happened to the soldiers.

Enter the Nekker Cave (#2) and get ready for a fight with about a dozen Nekkers. Try to kill them quickly so they can’t gang up on you. Once you reach #3 you’ll find a soldier with arrows in his back, obviously shot by the Scoia’tael.

If you continue forwards you’ll find the other exit is locked so make your way back the way you came.

If you say that they were shot by Scoia’tael Malena will beg you to follow her so that she can explain. She takes you along the coast to a Scoia’tael ambush. Once you win the Soldiers will give you a reward and then take Malena to Loredo.

If you claim that the Soldiers where killed by monsters they’ll be happy with that and pay you a reward. Malena is thankful for having been rescued and asks you to meet her by the Waterfall (#4).

Heading to the Waterfall you’ll find Malena but it’s a trap. Five Scoia’tael will run out of the forest and attack. Malena runs off. This is a tough battle on your own so try to draw the elves out and get in a few attacks before the rest can catch up.

Once you’ve defeated the elves you can follow Malena to her hiding place in the Ruins (#5). You can take her to Loredo, let her go or kill her yourself.