Echoes of the Past

Now that the king has given permission for you to investigate the site of the cataclysm make your way there to meet Yennefer. When you arrive she’ll be having an argument with Ermion.

Ermion doesn’t want Yennefer to use the Mask of Uroboros but Yennefer will go ahead and use it anyway. A storm will urupt and the Druids will try to calm it down. Follow Yennefer into the burnt forest and help her kill the Foglet. 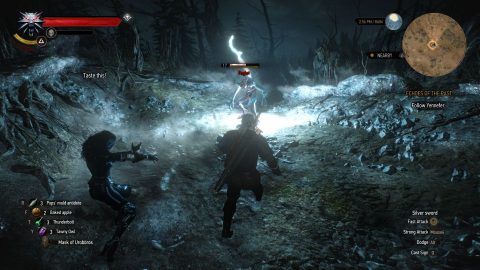 She’ll give you the mask to wear so that she can see through your eyes. The mask is used just like the Magic Lamp so go to the first location and use it to have a vision. Follow Yen to the next location and repeat the process another three times.

Ermion tells you that the Wild Hunt were seen at Hindersfjall so that’s where you’ll be headed next.