Make your way to Sigismund’s Bathhouse to the north of Novigrad and knock on the door. A voice at the door will tell you to leave. You can answer any way you like.

After a short while the doors will open and a man named Happen will tell you that Sigi Reuven has agreed to meet you. First head into the small room and change out of your clothes. Follow Happen through the bathhouse to one of the private rooms at the back. Inside you’ll meet Dijkstra with two of the other crime lords, Francis Bedlam (King of Beggars) and Carlo Varese (Cleaver). 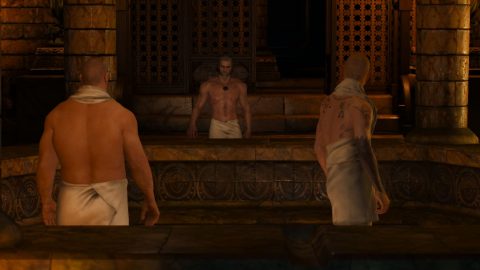 During the discussion a groug of Whoreson’s men will attack. Help Dijkstra fight them off and then talk to him about Junior. He’ll tell you that you should try looking for him at the Casino, Arena or at his Hideout.

You can search for Junior on your own or accept Cleaver’s help in The Gangs of Novigrad secondary quest.

Follow the quest marker to find Juniour’s hideout. When you arrive you’ll run into Cleaver’s dwarves who have already raided the house. You can have a look around but there’s nothing left to find here.

You won’t be able to get into the Casino without dealing with the guards out the front. You can either give them 200 Crowns to pay them off, make a deal with them, threaten them (which starts a fight), or use Axii. You’ll need Delsuions Level 2 to successfully cast Axii on them.

Inside the Casino there are 3 people you can play Gwent with. They don’t have any rare cards so you can ignore the games here if you wish. If you win two games of Gwent in a row you’ll be accused of cheating and “invited” upstairs for questioning. Refusing to go upstairs will result in a fight with the guards. 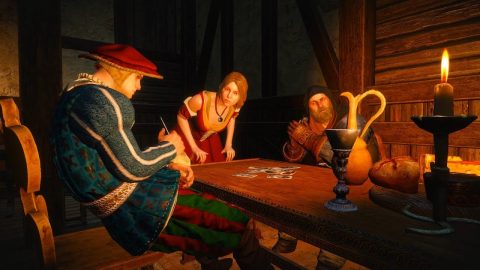 Once upstairs no matter what dialogue options you choose a fight will break out between you and the dealer and two guards. Once they’ve been defeated you’ll find a halfling named Rico tied to a chair. Talk to him to find out Junior is working with the Redanian army. If you free him it will begin the Honor Among Thieves secondary quest.

On the way to the Arena you may notice a man being killed by a couple of thugs. Search the body to find a Note. His name is Zdenek and he was invited to participate in the tournament.

Head to the Arena entrance and either pretend to be Zdenek if you found the note, pay them 100 Crowns, use Axii or fight them. If you start a fight here then everyone inside the Arena will be hostile towards you.

If you entered the Arena peacefully find Igor the Hook and try to convince him you’re looking for work as a bodyguard. Igor will want to test your skills by making you fight in the Arena.

You’re first opponent will me a man named Gustav Roene, then you’ll face 3 Dogs, the “Hairy Brothers”, a Wyvern, 2 Endrega and lastly Boris the Bear. 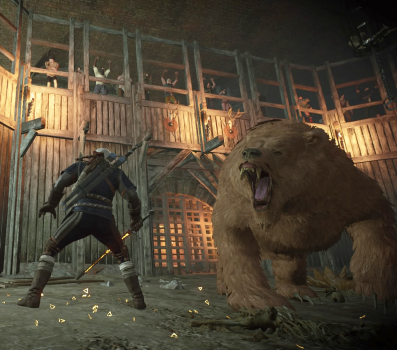 After the fights Whoreson will appear and order Geralt to be killed. Kill Igor and his men and then loot Igor’s body to find a Key. Make your way back to Igor’s throne and loot the chest next to it. Inside you’ll find a Note revealing the location of the hidden stash. It’s right next to the entrance to the arena.

Search the area find drag marks on the floor. Use the Torch to the right to open the secret door in the wall. Inside the hidden room search the chest to find another Note which reveals Junior is working with Radovid.

However you find out about Junior’s connection with Radovid make your way back to the Bathhouse and talk to Dijkstra. He’ll tell you to go and find Vernon Roche who should be able to get in touch with the Redanian contact.

Follow the map marker out to the countryside to find Roche’s hideout. If it’s your first time visiting one of the guards Hortensio will stop you from entering. Roche will walk out and give you permission to enter. 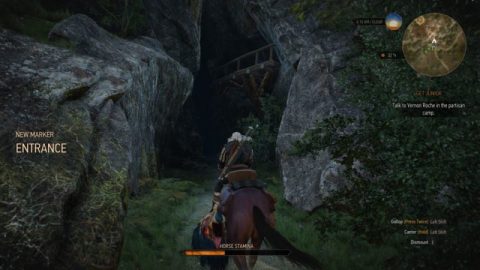 Enter the hideout and speak with Roche. Ves will enter and the two of them will have an argument before Ves storms out. Roche tells you he’s on his way to meet the contact at the Oxenfurt Chess Club and tells you that you can go along with him or meet him there.

Once you meet the Redanian contact you’ll no longer be able to explore the Junior’s Hideout, Casino or Arena. Make sure you’ve explored these areas before continuing.

At the Oxenfurt Chess Club you’ll find out that the contact is none other than Radovid himself. He no longer has a use for Whoreson Junior and so tells you where he can be found. He also tells you that he’ll want you to return the favor at a future date.

After your meeting with Radovid Roche will ask you to help with Ves. If you accept this begins the An Eye for an Eye secondary quest.

Now that you know Whoreson’s exact location make your way there and deal with the guards out the front. Grab their Keys and head inside. Make your way up to the top floor to find Whoreson torturing someone. Once Geralt deals with him ask him everything he knows about Ciri. This will start the Ciri’s Story: Visiting Junior quest.

After Ciri’s quest you’ll be able to spare or kill Junior. Regardless of your decision King Radovid’s men will find you and ask you to return the favor. This begins the A Favor for Radovid and Redania’s Most Wanted quests.

Return to Priscilla at the Inn to complete this quest.