The Play’s the Thing

This quest begins once you’ve chased down Whoreson Junior in the Get Junior quest and dealt with Menge and the Witch Hunters in the Count Reuven’s Treasure quest.

Head to the Kingfisher Inn and talk to Priscilla to update her about Dandelion’s situation. You’ll decide that you need the help of Dudu, the Doppler, but can’t speak to him directly. Instead you’ll need to come up with a play to let him know you need help.

Priscilla is quite excited about the idea and asks for your creative input. You’ll get to pick the name and the genre. A comedy will give you the most XP and Crowns. If you choose Drama a fight will break out at the end of the play. 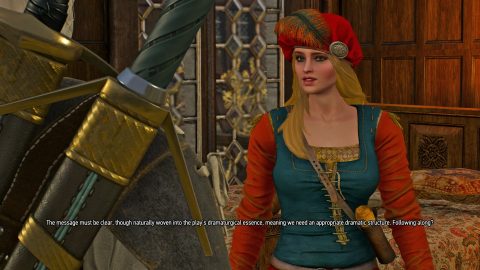 Once the script has been written Priscilla will ask you to take it to Irina Renarde who runs the theater. To get into the theater you’ll need to pay the Ticket Seller 50 Crowns or climb over the back walls.

Talk to Irina and tell her the plan. She’ll be happy to stage the play but needs help advertising the performance and ushers to keep the crowd in line.

To find ushers head to the docks and speak to a man called Sofus the Bull. You can pay 70 Crowns to hire him or fight him and Hal in a fist fight to hire both of them. If you lose they’ll cost 140 Crowns otherwise they’ll work for free.

The Puffins are unwilling to help because they’re being harrased by Fatso’s gang. Step outside and deal with the gang and then return to the Puffins. They’ll be in a much better mood and agree to help publicize the play.

During the play you’ll have a few lines of script. If you get all the lines right you’ll earn a total of 500 XP for this quest. If you mess up don’t worry, Dudu will always show up at the end. 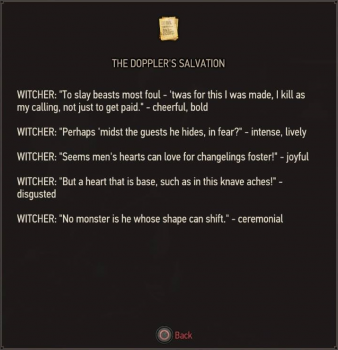 After the play Geralt informs Dudu of their plans to free Dandelion. This ends the quest and beings the next quest A Poet Under Pressure.