To begin this quest read the notices on the Harborside Notice Board. From here head to the fish market and speak with Gilbert. He’ll be standing guard by the bridge. He’ll tell you about the bodies and that you can find them at the docks if they haven’t been burned already.

Make your way to the Medic by following the map marker and talk to him about the state of the bodies. You’ll be given a clue to investigate Crippled Kate’s, a small brothel just to the east of the Docks.

Use your Witcher senses to investigate the area. You’ll find three sets of prints. Only one is of interest, the hoofprints that belong to someone walking uprights. Follow the hoofprints to the back of Crippled Kate’s and speak with the Madame.

The only way to get information from the Madame is to use Axii. She’ll tell you the creature you’re looking for is a Succubus and gives you the Key to her house. You can then enter through the front door to confront the Succubus. 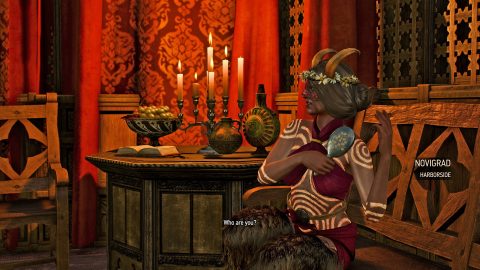 If you didn’t use Axii on the Madame you’ll need to find the perfume bottle in a nearby alley. Follow the scent around to a house where a man is acting strangely. You can’t go in the front door without the Key so go into the house to the south and climb up the stairs to the top. Climb up a ladder, across a few platforms and up another ladder. You can now enter the Attic of the house where the Succubus resides.

The Succubus is called Salma and tells you she doesn’t kill but was caught out in a surprise attack by the Guards. You can either kill her or tell her to leave the city. If you tell her to leave she’ll give you the Succubus Trophy to show as proof to the Guard. Take it back to Gilbert to complete the quest.