Redania’s Most Wanted is one of three Assassin’s quests needed to unlock Reason of State in Act III. The other two are A Deadly Plot and An Eye for an Eye. You must complete this quest before starting The Isle of Mists or it will fail.

Radovid has asked Geralt for help searching for Philippa Eilhart. It’s thought she might be hiding in the Elven ruins outside of Novigrad. Make your way to Est Tayiar. You’ll find it east of the Vegelbud Estate. 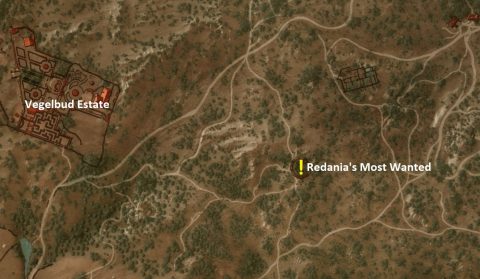 The Witch Hunters aren’t particularly excited to see you but they will accept your help. Head down the stairs and use your Witcher senses to find out where to place the Plate that the Witch Hunters gave you. This will disable the force field so you can get through. Look around for the breakable wall. Behind it you’ll find the Diagram: Feline Silver Sword.

You’ll find a Witch Hunter holding onto the next Crystal. He’s too frightened to go forwards and can’t go back because of the monsters. Either use Axii on him to get him to give you the Crystal or fistfight him. Either way you’ll have the crystal for the next portal. Look around for a chest. Inside you’ll find a Letter to Philippa.

Finally you’ll arrive at the lowest level of the ruins and be greeted by a Fire Elemental who’s been placed here to protect the area. If you’re having trouble with it use Elementa Oil. It’s immune to poison, bleeding and Igni. 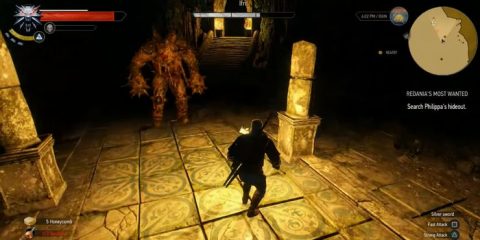 The gate at the end leads to Philippa’s room where you’ll find a piece of Agate. The gemstone that she likes to have around her neck. You’ll also find a broken Megascope and some Polished Crystal.

Make your way back to the last portal but don’t go through it. Instead turn to the right and activate the next portal. Stepping through this one takes you back to the beginning.