To begin this contract read the Oxenfurt notice board. You’ll be directed to see a guardsman named Nikolas Friedman near the docks. He gives you some information about the contract and then tells you to visit one of the witnesses and a medic.

To complete the contract you’ll need to talk to both of them. The witness is a drunk so you’ll need to use Axii or give her 30 Crowns to get any information from her. She tells you to look around a nearby alley for clues. Head outside and search the alley using your Witcher senses. When you’re done go and see the medic.

The medic tells you that all of the victims where stinking of alcohol. He gives you a Key so that you can examine the bodies yourself. Examine the bodies and Geralt will conclude that the monster is a Vampire who likes to suck on blood mixed with alcohol.

If you want to lure the vampire you’ll need to get drunk yourself. Go to The Alchemy and order a drink from Stjepan. Make sure you have no toxicity from potions or decoctions before ordering the drink or this quest will fail once you leave the tavern.

Once outside you’ll be singing like a drunk and staggering around the street. Make sure you stay within the quest markers or the contract will fail. Eventually you’ll be required to walk south along the road west of the inn. Follow the path around to the north and the vampire, Gael will notice you. 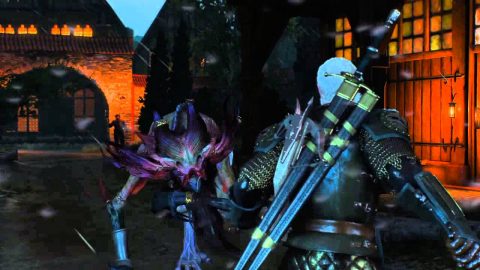 Fight off the Vampire and he’ll run away once his health is done to about a quarter. Follow him to the north and use your Witcher senses to track him to a hut. Climb a ladder up to the attic and drop down to finish off the Vampire. Once he’s been killed take the Katakan Trophy, a sword called Deargdeith, Katakan Mutagen and the Key to get out of the hut. Return to Nikolas for your reward.