Once you wake up from your dream you’ll be with Vesimir on the hunt for Yennefer. This is the major main quest for the prologue and includes the completion of two other smaller main quests, The Beast of White Orchard and The Incident at White Orchard.

Once you break camp you’ll be attacked by Ghouls. Make sure you’re using your Silver Sword when you fight them. Ghouls are susceptible to Silver and Necrophage Oil.

Once you’ve cleared the area of Ghouls use your Witcher senses to search the area around the path. Look for the spot where Yennefer dropped the Crystal Skull in the cut-scene. With your Witcher senses you should see it glittering. Pick it up for 50 XP. You can give it to Yennefer later for another 50 XP although it isn’t required for the quest.

Follow Vesimir as he travels along the road and over a small bridge. Once you reach the other side of the village you’ll come across a Merchant being attacked by a Griffin. During the cut-scene Vesimir will be scratched by the beast before it picks up the horse and flies off. 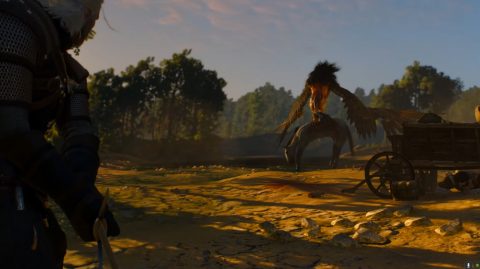 Mount Roach again and follow the path into White Orchard. Head into the tavern and ask the innkeeper about Yennefer. She claims she doesn’t know anything about her and suggests you ask some of the other travellers. Vesimir will start tending to his wounds at the back of the tavern, giving you a chance to go out exploring on your own.

The quest markers will point out three travellers that you can speak to. Talking to Gaunter O’Dimm will complete this objective but it’s worth talking to all of them.

The two peasants sitting nearby to Vesimir, Mikah and Dromle, won’t tell you much but you can eek out some more information by using the Axii option.

Aldert Geert doesn’t know anything about Yennefer but he will introduce you to the card game Gwent. This starts a secondary quest called Collect ‘Em All.

Gaunter O’Dimm is the only one who has actually seen Yennefer and says that she spoke with a Nilfgaardian Captain before riding off again. Maybe you should check out the Nilfgaard Garrison?

When you leave the Inn you’ll be attacked by three of the thugs you met earlier. During the conversation you can use Axii to stun one of the opponents so you only need to face two of them. 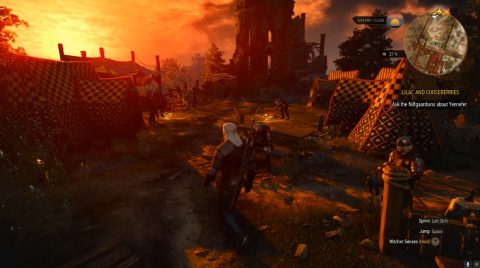 The Garrison can be found to the north of White Orchard just past a swampy area. Head up the steps and speak with Captain Peter Saar Gwynleve. He does have information about Yennefer but won’t reveal anything until you take care of a little problem of his, the Griffin who has been hunting in this area.

At this point the minor main quest, The Beast of White Orchard, will be open and you’ll need to complete that before continuing with this quest.

Once you return to Vesimir at the White Orchard Inn you won’t be able to come back so some of the secondary quests will be marked as Failed unless you complete them now.

Once you’re ready to leave White Orchard go and speak with Vesimir. When you leave the Inn you’ll be confronted by a group of Bandits. This starts The Incident at White Orchard quest.

Once the Bandits have been defeated Yennefer will show up with a Nilfgaardian Patrol. You’ll travel with her to Vizima.