Crime and Punishment is an unmarked quest north of Fort Etnir. When you sail past the peninsula you’ll find a man chained to a rock and being attacked by Harpies. 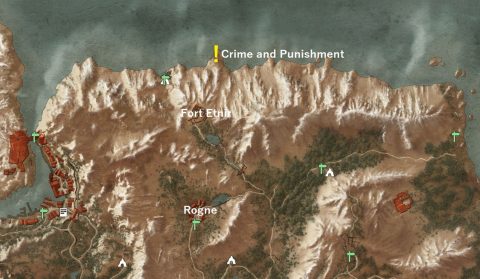 Kill off the Harpies and talk to the man whose name is Yorg. He claims he was framed for murder and begs to be set free. If you choose to free him make sure you do so right away. If you travel to far away from Yorg the quest will fail.

After freeing him Yorg will thank you and offer to help you if you ever meet again.

If you happen to travel south to Rogne you may find a group of mouners on the outskirts of the village. A woman named Gretter is there, praising her uncle who was murdered. Yorg’s sister is also there. She’ll tell you that she was to blame. She told Yorg that Gretter did bad things to her. Yorg went off into a rage and killed Gretter’s uncle.

You can either tell Yorg’s sister that Yorg has been freed or let her think he’s dead. Either way the quest will be updated.