Master of the Arena

Head to the small village of Hov on Spikeroog and speak to the Guards in the tower overlooking the arena. They’ll tell you that the fights have been cancelled due to a Wraith that haunts the arena. 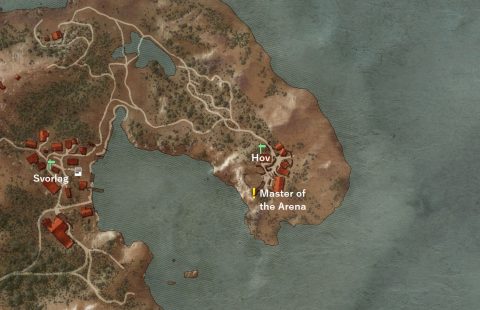 The Wraith is Ulle the Unlucky who never wins a fight. He was ridiculed so much by a Jarl that Ulle killed the Jarl while in the arena. As a result the Jarl cursed Ulle so that he would never win a fight again.

If you agree to help deal with the Wraith the guards will off you a reward plus a percentage of the profits from the first fight.

Head into the arena and speak to Ulle. Talking to him won’t lead very far and he’ll just tell you to get on with it. If you fight and kill him he’ll just disappear and you’ll need to wait a few days for him to return.

Listening closely to the story you’ll realize that to lift the curse you’ll need to let Ulle win. Fight him but don’t strike back. Ulle will do enough damage to win the fight and the curse will be lifted.

Go back and talk to the guards who will give you a few Crowns for your help. Return in a few more days for another 20 Crowns from the profits of the first fight.