Make your way to Fyresdal and you’ll see a group of men in the middle of the village. One of them will call you over to talk to you and dismiss all the others. He tells you that he was attacked by Nekkers and wants you to clear them out. If you haggle with him he’ll agree to any price.

Head out to the spot marked out to the northeast of the village. You’ll find a dead horse and destroyed wagon. When you examine them a boulder will roll down from the hill narrowly missing you. Climb up the hill to investigate. When you get there you’ll see a set of Nekker tracks. Follow them around to cave entrance.

When you enter the cave the entrance will get blocked behidn you and you’ll be ambushed by an Arachas, 2 Endrega and 6 Endrega Workers. Kill them and continue following the tracks through the cave. At some point one of the Nekker footprints will turn into a childs. Was someone wearing nekker boots?

At the end of the cave you’ll come to a room with some childish drawings on the wall. It looks like plans to target and kill Geralt.

Head out through the door and make your way to the meeting place of whoever was plotting this plan. You’ll need to arrive at night time, after 8pm. While there you’ll be approached by a Godling, Ice Troll, Doppler and a Werewolf. 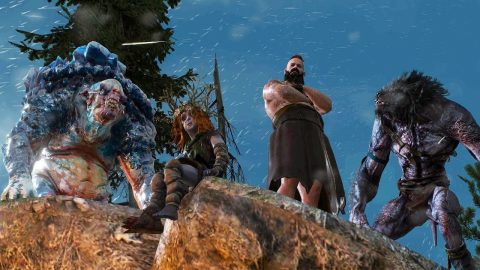 This odd group of monsters wanted to scare you for being a menace to other monsters. The werewolf appears to be out for blood. You can try to convince them that you’ve helped monsters in the past and aren’t such a bad guy.

You’ll need to give them two examples of how you’ve helped them. You can tell them how you helped Johnny in Ladies of the Wood, let Sarah stay in Novigrad in Novigrad Dreaming, spared Salma in Deadly Delights, spared Allgod in A Greedy God, spared the Imp in An Elusive Thief, spared Wham-a-Wham in Missing Miners or lifted Morkvarg’s curse in In Wolf’s Clothing.

If you haven’t helped enough monsters in the past you’ll be attacked by all of them except the Godling. If you give them enough examples the Werewolf will still attack.

Afterwards the Godling will approach and give you the Nekker Hide Boots. This ends the quest.