The Heroes’ Pursuits are a series of horse races that culminate in a race around Freya’s Garden for the championship. You can find the three pre-championship races at Kaer Trolde, Fayrlund and Fyresdal.

This quest can be started by starting any one of the horse races, by reading the notice on the Larvik notice board or by speaking to Svan in Larvik on Hindarsfjall.

Head out to the road northeast of Rannvaig where you’ll see the riders gathering for the race. Speak to the race master to join in. There are no obstacles and it’s a fairly simple race. Just make your way along the paths to Kaer Trolde’s gate. When you win you’ll be given 80 Crowns and Zerrikanian Blinders.

You can find the race master on the road east northeast of Fayrlund. Talk to him to begin the race. This is a short race but for part of it you will be racing along the edge of a cliff. Make your way to the finish line in first place and you’ll be rewarded with 50 Crowns and Zerrikanian Saddlebags.

The starting point for this race is between Blandare and Palisade. Talk to the race master to begin the race. After you start a storm will thunder overhead. This shouldn’t effect the race at all. Win you win the race you’ll be rewarded with 50 Crowns and a Cavalry Saddle. 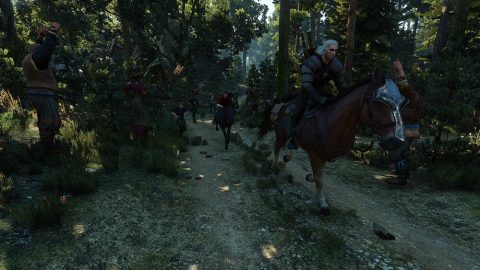 Once you’ve won all of the other races at least once you can head to Svana in Larvik to let her know you want to compete against the champion, Astrid. This race is more challenging than the others but if you lose you can try again. When you win you’ll be rewarded with 90 Crowns and a Zerrikanian Saddle.