The Lord of Undvik

The Lord of Undvik takes place after The King is Dead – Long Live the King when Crach an Craite tasks you with finding his son, Hjalmar, who has gone off to slay a giant. When you’re ready hop on a boat and sail over to Undvik. 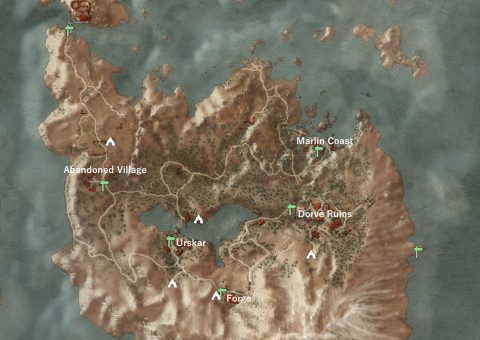 Make your way to the northern village of Marlin Coast. This will unlock your first Signpost for Undvik so you can travel back and forth as you wish. The Lord of Undvik is a long quest that takes place over most of the island so feel free to explore all the areas of the island as you go.

Head down the path to the south and then west. Eventually a cutscene will play with an Ice Giant feeding meat to the Sirens and someone inside the ship.

Stranger in a Boat

Enter the boat to find a man who’s been left there to fix up the boat for the giant. It looks like he’s been there for a while and has started to go quite mad. You can ask about Hjalmar and directions to the camp.

Leave the boat and follow the map marker to the camp. There’s no-one left alive here but you do find two tracks to follow. Footsteps and tracks left by a boat being dragged along the ground.

Follow the trail of footsteps to a dead Nekker and a few arrows. Continue along to the west until you reach an abandoned village.

From here head north until you find a body. Search it for the Hornwall Horn. You can equip it in one of the pocket slots and blow it to make all Sirens within hearing distance to drop from the sky.

Continue follow the the footprints to find they’re joined by a few Trolls. Follow them into a cave and you’ll find the Ice Trolls cooking up the archer in a pot of soup. The archer cries out for help.

You can attack the Trolls and kill them or play a guessing game with them. The Trolls give you a riddle first and the answer is easy: Troll. Next Geralt gives them a riddle they can’t answer and the reluctantly give up their meal.

The archer you rescued is Folan. He’ll come with you for the rest of the journey. You can ask him about Cerys if you’ve completed the Possession quest and also about Hjalmar. Head back to the camp and follow the other trail.

Follow the trail south across a stretch of land between two lakes to the village of Urskar. From here follow the footsteps south into a cave.

Dive into the underground lake and follow the trail back up. You’ll find the body of Thorsten along the way. Continue to find another body, Arvid an Tordarroch, and continue climbing up. You’ll soon find a path that leads to a nest of Harpies around a tree. Kill them, or ignore them, and then use the ladder to climb up. Follow the passage out to the exit.

You’ll come out just by the Clan Tordarroch Forge. This is where you’ll find the fine tools for the Master Armorers quest so you might as well explore the forge and grab them now.

Enter the hut to find a gruesome sight but Folan tells you none of the bodies are Hjalmar’s men. You’ll also catch sight of someone running off. Follow the footsteps to Dorve Ruins where you’ll find Hjalmar.

Talk to Hjalmar to find out what’s going on and when you’re done follow Hjalmar to the cave where you’ll find the Ice Giant. 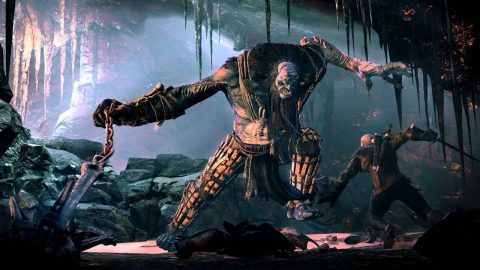 When you find the Ice Giant he’ll be sleeping and Vigi the Loon will be trapped in a cage. Hjalmar wants to leave him there because he says he’ll do something crazy but you can free him if you want.

If you walk on the snow you’ll wake up the giant. Carefully walk around to grab the Key and release Vigi if you want. If you’re successful he’ll immediately kick the giant and wake him up. If not he will die anyway.

If you want to make this fight easier prepare your blade with Ogroid Oil. The giant isn’t too difficult to fight but will knock you away and grab an anchor to use as a weapon once he’s down to about one third health.

Once the giant has been killed you can either go back with Hjalmar now or stay and loot all the containers. You can then meet Hjalmar back at Marlin Coast later.