Jorund of Arinbjorn has posted a notice on the Arinbjorn notice board requesting the aid of someone who knows how to get rid of Wraiths. Read the notice to begin the quest or speak to Jorund directly in the Arinbjorn tavern.

When you first enter the tavern you’ll be confronted by two locals, Kori and Kraki who don’t like people from the continent. Jorund will run them off and ask you to have a drink with him. He’ll tell you about the strange happenings around the lighthouse and the men who have gone missing, including the lighthouse keeper, Mikkjal.

Make your way north towards the lighthouse. Along the way you’ll most likely encounter some Wraiths and a couple of dead bodies. Continue until you find the hut. Knock on the door and talk to Mikkjal. He’ll tell you about how he ended up there and give you the Lighthouse Key.

Make your way up towards the lighthouse and deal with any Wraiths you come across along the way. Examine the markings on the tower to find out the place is cursed and that the large Wraith is a Penitent who haunts those who have done bad things.

If you want to learn the full story enter the lighthouse and go up to the first landing where you’ll find a Document. Mikkjal was involved in causing shipwrecks by turning the light off as ships passed.

Return to Mikkjal and confront him if you want. Either way the outcome will be the same. You’ll need to escort Mikkjal out so he can light a fire and lift the curse. The Penitent can’t be hurt until the fire is lit. 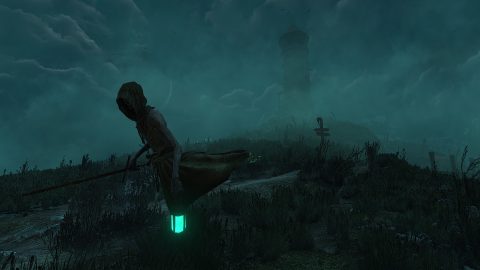 The Penitent is susceptible to Moon Dust and Specter Oil. The Yrden and Quen signs also work well against it. Once the Penitent has been killed loot it for the Wraith Trophy and Ashrune, a steel sword. Return to Arinbjorn and speak to Jorund for your reward of 184 Crowns and to complete the quest.