When you reach the island of An Skellig you’ll realize it’s raining nonstop. Go to Urialla Harbor where you’ll overhear a few men talking about the tower causing the rain. When you get close enough they’ll call you over. 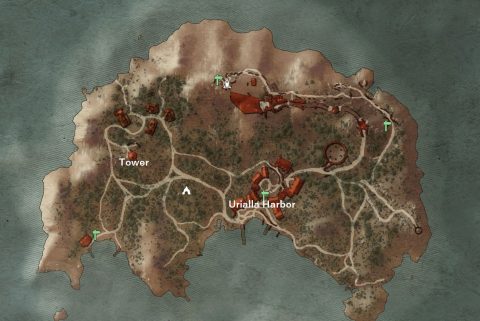 Talk to them to find out that the tower appeared one day out of nowhere and since then the rain hasn’t stopped. A druid and a few men went inside to investigate but haven’t been seen since.

Make your way to the tower and head inside. Go down the stairs and then enter the portal. You’ll come out in another part of the tower but will immediately be attacked by a Golem. Take it out and then talk to the man behind the barrier.

The man is a mage, Sigo Buntz, who purchased the tower but it’s defense mechanism activated before he could work out how to disable it.

To disable the tower’s defences you’ll need to find Gottfried’s Omni-opening Grimoire. Once you’re done talking with Sigo he’ll open a portal so you can find the grimoire.

Swim through the tunnel and take the exit to the left. When you pull up out of the water the defence mechanism will start summoning monsters. You’ll face 3 Alghouls, a Gargoyle, a Werewolf and finally a Cow, once the tower runs out of energy.

Loot the chest on the table for the Library Key. Head back and go through the other exit to the library. Unlock the door and go through. Start examining the books in search of Gottfried’s Omni-opening Grimoire (GOG). When you find it the room will fill with gas. Luckily it’s limited to the library so step outside of the room to the flooded passageway.

Head back to Sigo and he’ll figure out how to remover the barrier that has him trapped. While Sigo attempts to disable the defences the tower will summon an Earth Elemental.

Kill the elemental and talk to Sigo again. He’ll thank you for your help and give you a silver sword called Moonblade. He’ll then teleport the tower back to Kovir and you back into the ocean.