Read Lindenvale’s Notice Board to find this contract. Alternatively you can find the monster tracks by yourself or the explore the cave.

Follow the map marker to the area and use your Witcher senses to examine the dead Wolves. Follow the tracks to some fur on a tree. Geralt will then pick up the scent which you can follow to the side of a cliff. Examine the pile of dung and Geralt will conclude that the monster is a Fiend.

The entrance on the side of the cliff is too high up to reach but there is another entrance if you look to the north. Drop into the cave and examine the carcass, tracks and blood splatters. Geralt will conclude the animal is a Chort, which is a kind of Fiend.

The Chort won’t come out by itself, you’ll need to lure it out with a Chort Lure. The Chort Lure Formula will appear in your alchemy tab.

Leave the cave and examine the dung to take some. You’ll also need Crow’s Eye. There should be a plant nearby if you haven’t collected any up until now.

Once you have the Chort Lure enter the cave and equip the lure in one of your equipment slots. Use the lure on the indicated spots and the Chort (Howler) will appear. 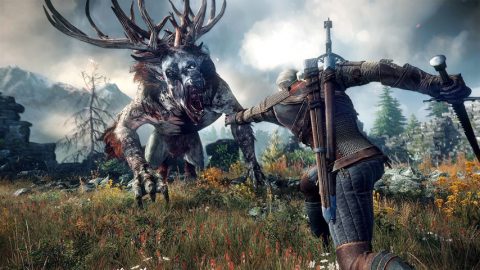 Due to the small size of the cave the Chort will be difficult to avoid. Use Quen to protect against its charge attacks and Relict Oil to cause more damage.

Once Howler has been killed loot the body for the Chort Trophy, Chort Mutagen and a silver sword called Azure Wrath.

Return to Lindenvale and speak to the hunter who made the contract for your reward.