After Lara takes a look around through the camera dive into the water and swim past the block where you can pull up. Swim behind it and around to the left to find Treasure 1/30. 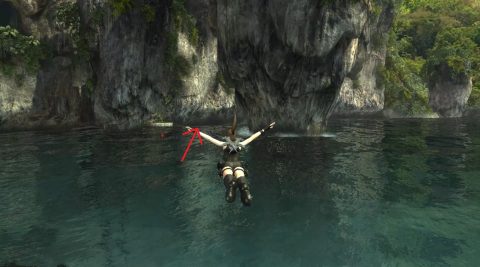 Swim back to the block and climb up. Climb onto the cliff face and make your way up and around to the right. Continue up to the handholds, jump across the gap and drop down to the small cave. Shoot or kick the spiders and then pick up Treasure 2/30 and a Health Pack.

From here dive into the water and climb up onto the block again. Climb up once again but this time make your way up and around to the left. When you can grab the handholds traverse to the left and jump backwards.

Press space to stand on the ledge and shimmy across to the right a little. Jump across to the flat ledge. You’ll need to press down and jump for Lara to jump across.

Head up the steps and kill the spiders. At the top of a second set of steps you’ll find a Health Pack. Slide down the ramp to right and swing off the horizontal bar to the handhold. Jump up and climb up to the stairs.

Run around the corner to the right and then drop off the edge on the right side. Climb down as far as you can and jump back to the alcove where you’ll find Treasure 3/30. 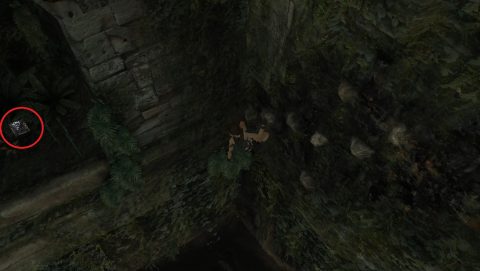 Drop off the edge and jump back to the wall. Climb back up to the steps above. Head up the stairs to the stone outcropping. Watch out for the spiders that crawl out and then jump across to the handhold on the wall to your left as you step out. 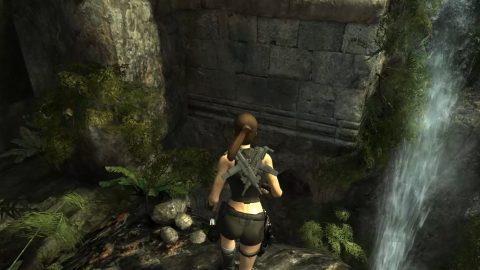 Pull up onto the ledge and jump across to the opposite wall. Climb up and run forwards. Take a swan dive off the edge to the left to land on a lower rock outcropping where you’ll find Treasure 4/30. 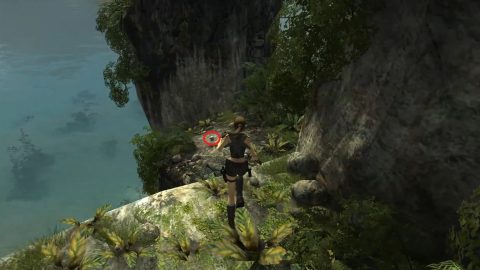 Jump back to the previous outcropping and climb back up the wall. This time run around to the right. When you come to the pit use the grapple to swing across. Continue forwards and roll under the rocks.

Run up the stairs and break the jar on the right side for Treasure 5/30. Go to the other side and chimney jump up between the wall and the pillar. When you grab the handhold on the pillar climb around to the left and jump back to the outer pillar. 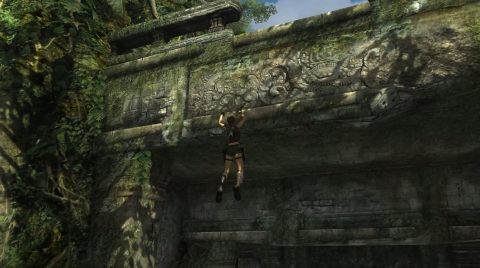 Grab the Health Potion and then run along the river towards the hill with the tigers. After a short cutscene the 2 tigers will attack. Kill them and then break the jar behind the small stone walls for Treasure 6/30. 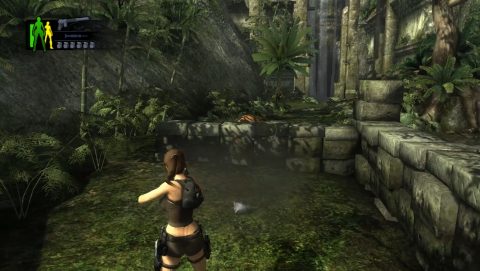 Head around to the pillars to the left and a third tiger will attack. Take it out and then run to the other side of the ruins for a Health Potion.

Look for the beam between the two columns and jump up to it. Climb on top and grab the handhold on the broken column. Jump across to another beam, then up to a handhold on the tall column. Climb around to the right and chimney jump up to a higher handhold. 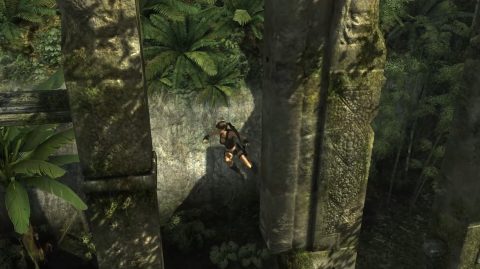 Drop down once and jump across to the ledge. Run around to the right and you’ll find Treasure 7/30. 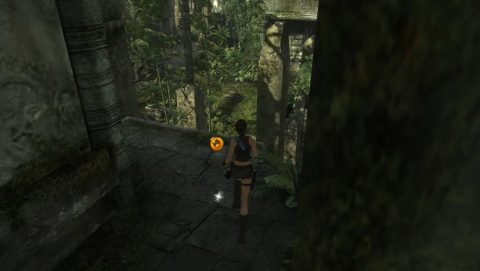 Shoot the birds as the emerge from the trees, then jump to the column on the left. Traverse to the right and jump to the pole. Climb up to stand on top of it so you can jump to the top of another column. Continue to the column with the beam and you’ll be back where you were before.

Make your way around the columns towards the stairs. Walk across the beam and jump across to the ledge. Traverse across to the right for a jar with Treasure 8/30. 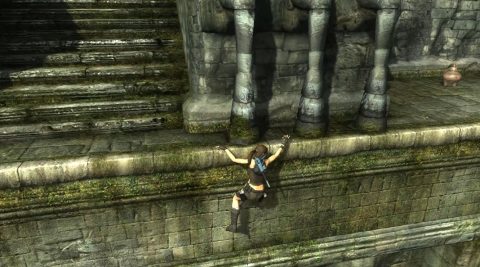 Grab and grab the edge again. If you want more health traverse all the way to the left for a Health Potion, then go back to the center and climb up the stairs.

Crawl under the fallen tree branch and drop over the edge. Traverse around to the left and pull up to crawl under another part of the fallen tree. You’ll be attacked by 3 tigers on the other side.

Once you’ve dealt with the tigers head halfway up the stairs and climb onto the ledge on the left side. Use the horizontal pole to swing across to the far ledge and follow it along to the left. Drop onto the sloped section and you’ll grab the edge as you fall down.

Drop down once and traverse to the left. Jump to the horizontal pole. Swing to the next one and then to the wall. Climb to the left and pull up for Treasure 9/30. 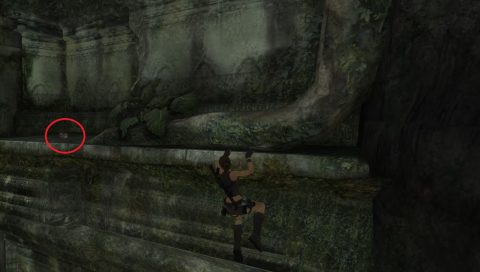 From here grab the handhold on the wall to the left and climb up to stand on the short beam. Jump across to the beam on the other side and traverse across to the right as far as you can. Climb up and pull up to where you were before with the 3 tigers.

This time run up the stairs and continue forwards. Wait at the edge of the pit for the birds and then use the beams and handholds on the walls to make your way across to the other side.

Take out the spiders on the other side and drop down after running up the steps. At the t-junction go to the left for the final treasure. Use the smile pile of rocks on the left side so you can get up to the ledge above. Then chimney jump from the wall on the left so you can grab the beam. Pull up and break the jar for Treasure 10/30.

Make your way back across the beams to the other side. If you fall down you can climb up onto the final beam in the pit and then jump over to the stairs. Run up the stairs to complete this section.

From the top of the stairs you can try to pull the Switch if you want to see what happens. The two ropes holding the lift is blocked. You’ll need to free the ropes on both sides.

Begin by running around to the right. Crawl through the gap in the stone wall so you can drop down to the courtyard below. Grab the pole and stick it in the pillar with the hole. Climb onto the pole and jump to the back pillar. Jump across to the right and then to the wall.

Climb up the handholds on the wall until you can jump back onto the top of the closest pillar. Jump to the next pillar and across to the short beam. You’ll be attacked by bats along the way.

Climb around the pillar and jump back to the platform. Grab onto the pole holding the ropes and pull it out. 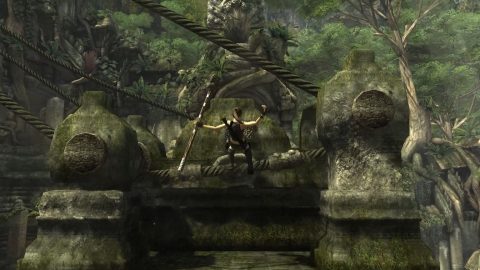 Turn around and pick up the Health Potion towards the back wall. Jump back down to the courtyard and roll through the hole to the far right. Break the jar on this ledge for Treasure 11/30. 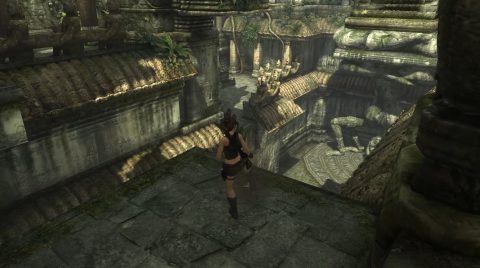 Use the ring to grapple over to the other courtyard where you’ll be attacked by bats. Grab onto the handhold on the wall and traverse around to the right. Make your way around the building that juts out over the edge until you can chimney jump up to the second rope. Grab another Health Potion near to the far wall and then use the grapple to pull out the ring holding the rope.

Jump to the top of the pillar in the courtyard to the right. Jump to the beam and climb across. Jump to the next pillar and then to the wall. Shimmy to the left until you can climb up through the stone fence.

Run back to the wooden lift and pull the Switch. As the lift falls quickly use the grapple to hold onto the ring and rappel down to the bottom.

As you step forwards towards the statues you’ll be attacked by red and green lizards. The shotgun works pretty well on them. Just try to keep your distance. 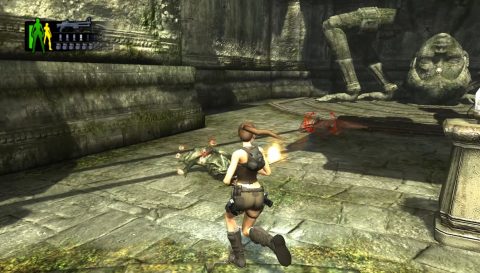 Take the exit on either side and follow the stairs down to a pit in the floor. Grapple onto the ring and lower yourself down. Walk forwards for a cutscene and then break the jar on the left for Treasure 12/30.

This area is quite tricky as there’s a lot to explore. First shoot the bats and then run down the steps to the right to the first landing. Climb up the handholds and pull up onto the ledge above for a Health Potion. 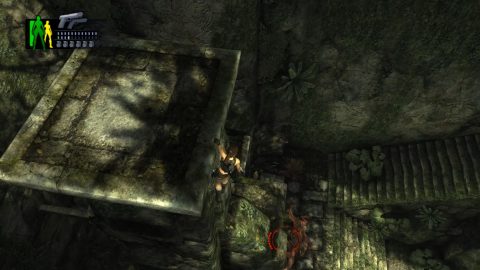 Pull up onto the top of the stone block and jump to the small room with the metal lotus flower. Approach it and grab the Shiva Gem. You’ll notice one of the gates below opening. Another gate also opens on the other side of this area.

Grapple onto the lotus flower and rappel down on the left side (while looking at the flower). Drop down to the ledge below and climb up the handholds on the stone column. Jump across to grab the platform to the right and traverse all the way to the right. Climb up into the dark alcove for Treasure 13/30. 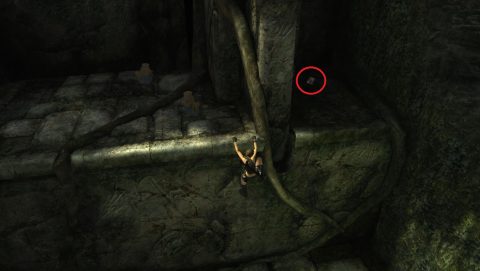 Climb up and to the left. Make your way around to a small platform in the corner where you’ll find a Health Potion. From here take a running jump to the lower square platform with Treasure 14/30. 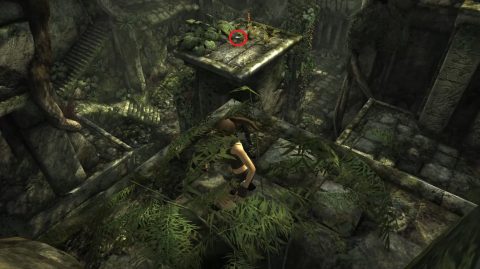 Swan dive back to the ledge with the red lizard and climb up the handholds again. This time jump across to the stairs on the right side. Up the top of the stairs you’ll find Treasure 15/30 to the right and a Health Potion to the left.

Drop over the edge where you found the health potion and drop down once. Pull up to a small square ledge with Treasure 16/30. 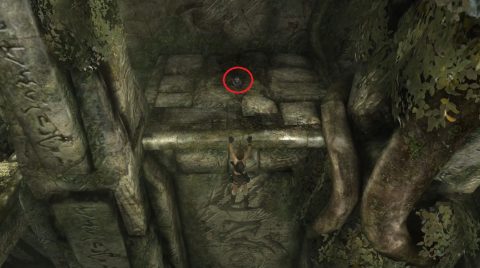 Drop off the ledge on the left side and drop all the way down to the floor. Watch out for the green lizard wandering around down here. Pick up the Health Potion and move forwards. Two more lizards may appear behind you.

In the far back corner you’ll find a jar with Treasure 17/30. 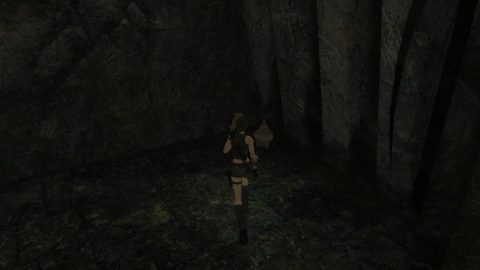 To get back up you’ll need to chimney jump in the corner to the right of where you found the treasure. Find a spot between two walls and jump to the right first. The wall on the left has some writing on it. Continue jumping up until you land on the ledge above. 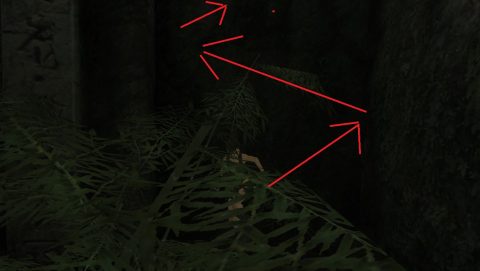 Walk to the edge near the stone pillar on the right and drop off. Jump to the other side of the pillar to the left and pull up. Take out the two red lizards before it pushes you off or you’ll need to climb up again.

From here climb to the top of the stone pillar. Pull up and jump across to the ledge with the beam. Use the ring to grapple over to another small room with a metal lotus flower. Take the second Shiva Gem and the second gate will open down below. 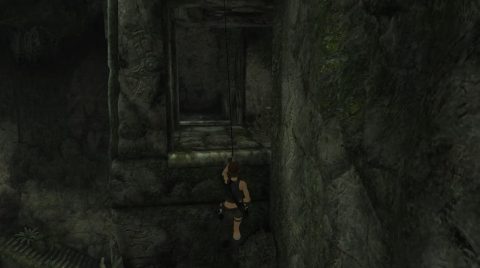 Grapple onto the flower and rappel down to the g