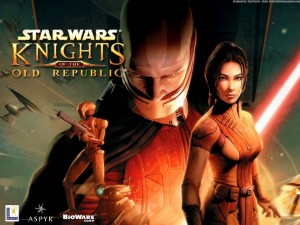 The Star Wars: Knights of the Old Republic (KOTOR) walkthrough will take you all the way through this best-selling role-playing adventure game in the rich Star Wars Universe. KOTOR is such a diverse game that it won’t be possible to list all possible variations and dialogue options but I’ll do my best to show you solutions to all of the quests and challenges.

To begin with you have three classes to choose from, Soldier, Scout and Scoundrel. The soldier has the most vitality but gains skills more slowly. The scoundrel has a quick skill progression but low vitality while the Scout sits in the middle.

Based on your interactions with others you’ll have the option of choosing to follow either the Light or Dark side of the force. It’s generally pretty obvious which interaction leads to which side of the force. Either direction will give you a different gaming experience. In this walkthrough I’ve focused more on the Light side but I hope that it will be helpful to all players of KOTOR.

Star Wars: Knights of the Old Republic is a great game and one of my favorite RPGs of all time. It was released in 2003 by Lucas Arts and developed by BioWare. It was released first on the Xbox and then a on the PC a few months later.

The story is set about 4,000 years before the rise of the Empire, when the Jedi are under threat by the Dark Jedi Darth Malak. A number of characters will join your party as you progress and you’ll get to see some unique sights on various planets.