You can begin this quest after you finish the main case The Muse from Abroad. Eavesdrop on two men talking inside the Cordona Chronicle to hear about a man who was killed in the Old Ruins on the southwestern side of Grand Saray. 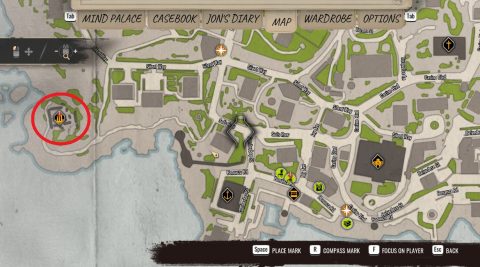 When you arrive you’ll be greeted by the undertaker. Talk to him about what happened and then walk up to the ruins. The victim will be on the ground. This is the marker #1. Inspect the body for the four clues, the chest wound, blindfold, keys and gun.

At marker #2 you’ll find non lethal rounds, a blindfold and footprints showing a man facing away from the victim. Just under the arch you’ll find a yellow duelist suit on a slab. Take it with you. 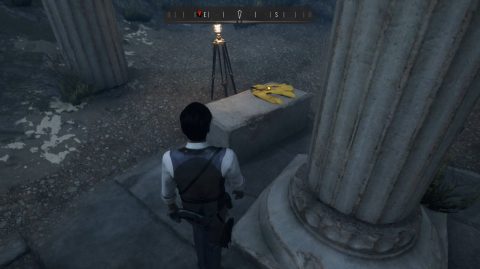 Marker #3 is on the ground. You’ll find a case for guns but it only contains non-lethal cartridges. Rotate the case around for more clues. Marker #4 is on the fallen pillar. You’ll find a Duel Oath and book with the Club Rules. Jon will challenge you to follow the rules for the rest of the case. The rules are:

Walk up the hill to find a LeMat revolver, .42 calibre in the grass. Examine it to see it has live rounds and one of the bullets is missing. On the stone wall you’ll see a patch of red. 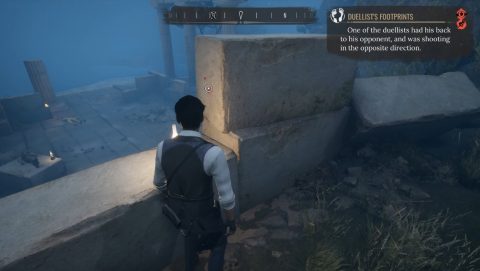 Now that all the clues have been uncovered run back down to the body and interact with the sparkle to start the reconstruction. 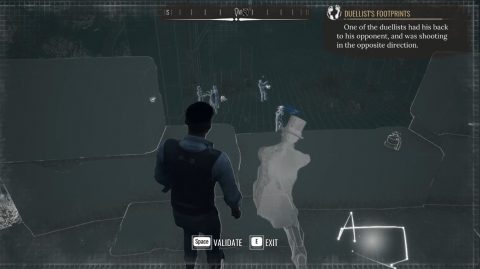 After the recreation Sherlock will wonder if another person was present. Go into the recreation again and this time change the man in the top hat at marker #3 to have both hands to his ears as he drops the case and then add an unknown figure as the shooter on the hill. 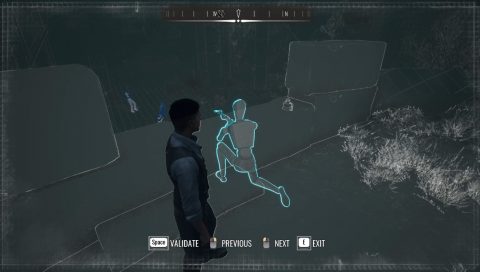 Go back and talk to the undertaker again. If you want to follow the “club rules” don’t ask him about the Blind Dueling Club. Instead just say “Let’s get to the point”.

By now you should have collected all the evidence in this area. Is time to search the archives.

Go to the Police Station Archives and pin the objective “Blindfolded Victim”. Search for “Crimes – Violent Crimes”, “Subjects – Victims” and “Districts – Scaladio”. You’ll be given Report No. 32-07 which has the address of the victim’s sister on Baskerville St between Vernet St and Bonaparte St in Southern Scaladio.

Go also to the Cordona Chronicle Archive and with “Undertaker’s Testimony” as the evidence search for “Period – Recent”, “Section – Front Page” and “Districts – Old City”.

You’ll find an article about another “accident” involving the Blind Dueling Club. This time someone stepped off a cliff and died.

Now that you’ve collected all the evidence it’s time to talk to the sister. Put on a Police Uniform and pin the objective “Report No. 32-07” to your screen. Head over to the Von Staub Residence in Southern Scaladio. 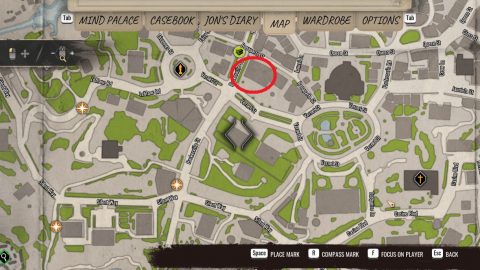 Go through the front door and then the butler will let you through the door to the left to the boudoir. Talk to Von Staub and observer her. You should conclude that she’s a “Victim of Beatings”.

Talk to her again to finish the dialogue and examine the piano for clues. You’ll find sheet music and a photograph.

Head out the door to the right of the piano and take a look at the vases. If you’re following the rules of the club take the opportunity for shooting practice. 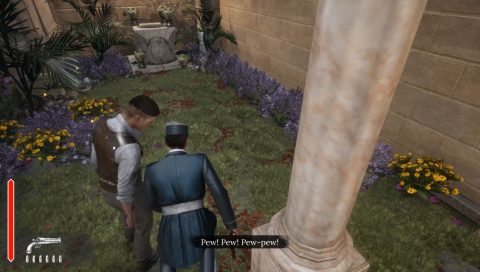 Shoot the 5 vases and then head up the stairs. Enter the door straight ahead to the hallway. Then go into the room on the right with the white dove. This is Magda’s room.

Starting on the left take a look at the dresser where you’ll find an ointment box. At the foot of the bed on the red stools you’ll find a picture in a circular frame.

Check out the paintings covering the windows, and then the portrait on the easel. The portrait has a few clues, the portrait itself, the empty gun rounds below the portrait and the colour palette on the round table. 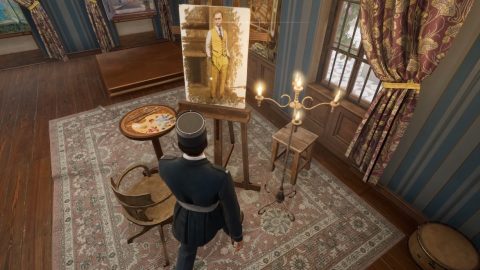 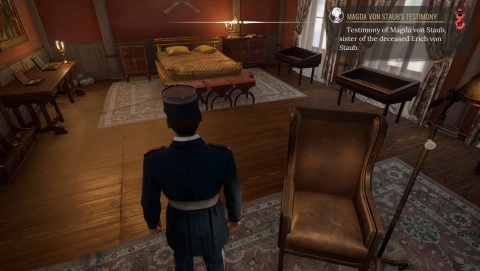 Open up your casebook and perform chemical analysis on the burnt letters. You’ll restore some of the writing and get a few snippets of information.

Return to the lower floor and speak to Magda again. Ask her about all the evidence you’ve collected so far. Leave the house and pin “Picture of Blindfolded Men” to your screen.

The Blind Dueling Club can be found at the southern end of Baskerville St in Grand Saray. You’ll need to be wearing your Yellow Duelist Suit or the butler won’t let you in. 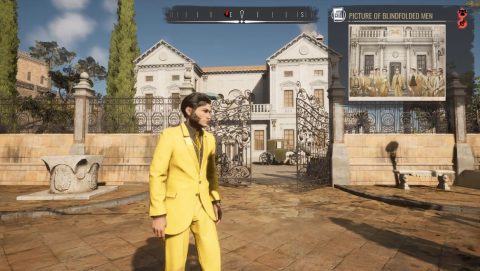 Once inside get ready for a battle with the club members. If you’re following club rules make sure to arrest them and not kill them. This is significantly harder to do so try and use the environment to stun them. 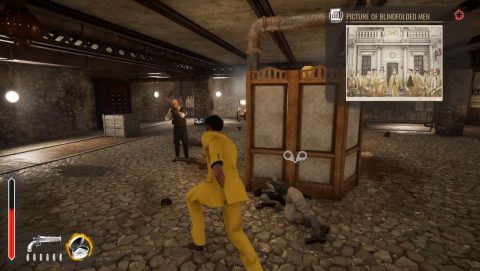 Once you’ve arrested all the members search around for clues. To the left of where you entered you’ll find a blue book, paint bullets and a map with red pins in it.

Check out the coffee table for a bottle of wine, two wine glasses and a collection of telegrams. Look on the rug for the fourth clue, a broken glass. Also examine the shooting dummy in the middle of the room.

Pin “The Other Club Member” to your screen and use concentration to follow the tracks from the coffee table. They’ll stop at a lamp where you can find a hidden lever. 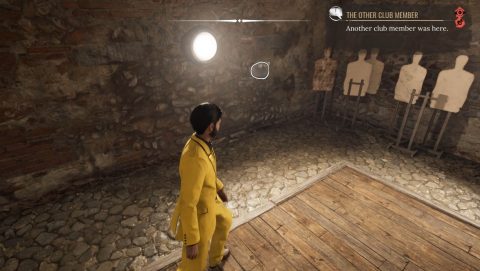 Pull the lever to move aside the drawers to the left, revealing a secret exit. Take the stairs up and you’ll be confronted by Heinrich Feugen von Cramm.

Observe him to find all the clues. You should conclude that he is a “Valuable Witness”. Chat with him until you’ve exhausted all the dialogue options.

Search the room for clues. You’ll find a picture on the wall, books on the shelf, magnifying glass on the table, a letter on the safe, gramophone and recordings, a newspaper to the right of the piano and a bust and portrait on the piano. 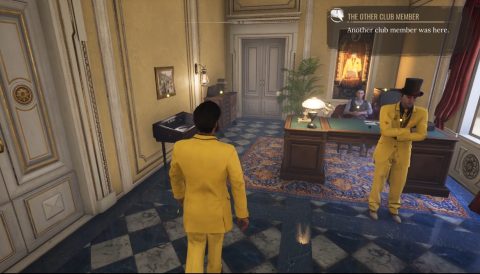 Talk to Heinrich again and tell him that “You noticed more at the dual”. Present all the evidence to him but don’t accuse him. Leave through the other door in this room to the outside.

Back to the Von Staub Residence

Return to the Von Staub Residence and talk to Magda. You’ll want to put your Police Uniform on again. Accuse her of the crime. You’ll need to choose the evidence in the correct order to be successful.

What were the means of the crime? Missing Gun Case

What was the window of opportunity? Heinrich von Cramm’s Statement

What was the motive? Letter to Mr. Boddington

That should conclude the case and during the dialogue you’ll have the chance to free her or let her go. Considering the circumstances I chose to let her go free.