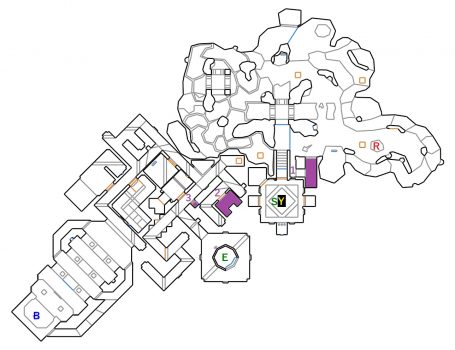 Clear out the Zombiemen in the starting room and open the doors to west, east and northwest. The Yellow Key will appear in the center of the room. Grab it and open the Yellow Door to the north.

Clear out the many enemies in this cavernous area and then dash across the gap straight ahead to the Button. 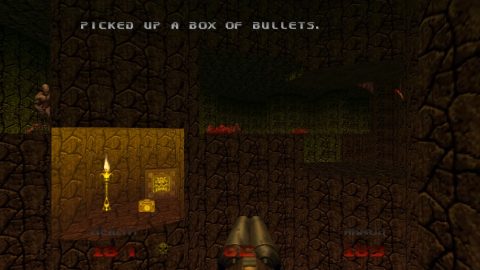 This lowers down parts of the cavern so you can continue making progress. Drop off the edge into the lava and quickly run around to the south on the eastern side of the central bridge. You’ll see an arrow in the lava. This points to a lift that you can ride of for Secret #1. Inside you’ll find a Rocket Launcher and Energy Cells.

Clear out the Zombiemen from the passageways. From the start of the teleporter turn left, right and open the wall to the left for Secret #2. Inside you’ll find some Rockets and other goodies.

For Secret #3 have a look at the face carvings on the wall to the south. Shoot the one that opens its eyes and an alcove will open with Mega Armor.

Make your way around to the north side of this area. The door to the left has a broken pathway so go through the door to the right. Grab the Computer Area Map and hit the Button to fix the pathway. Go back to the other door and carefully walk over the path. 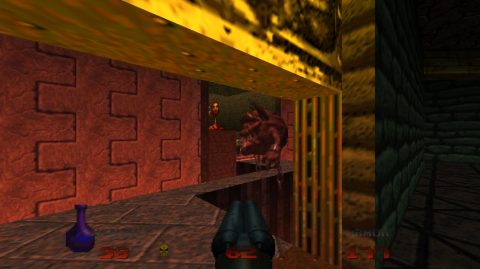 Press the Button up the steps to open up a further area to the south. Take out the Barons of Hell and other enemies and then grab the Blue Key. Watch out for the Barons of Hell that spawn in when you enter. You can run to a side passage and grab the Invulnerability to make this room easier.

Head back to the Blue Door which you should have a passed a few times already (from the teleporter in this section take a right and then open the door on the left).

Press the Button inside the room which opens a path up to the Red Key in the cavern area. Go back to the teleporter and step through to the cavern.

Make your way up along the west side and then follow the path up and around to a room with a Button. Press it and then dash out through a window to grab the Red Key. 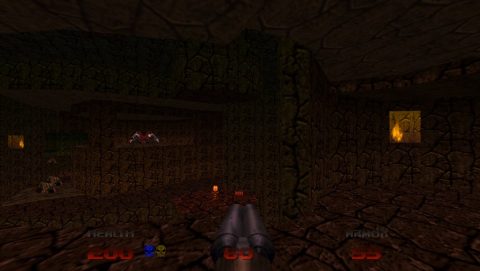 From here head back to the Start of the level and go through the Red Bars. Press the Button behind them and go back through the teleporter to the maze of passageways. Walk straight ahead and take the second left. The door to the Exit should now be open. Kill the Hell Knights and Baron of Hell, then drop into the dark area to complete the level.