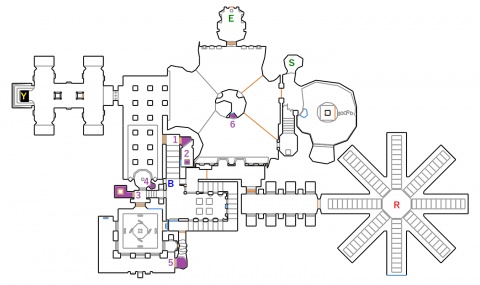 From the Start take out the Arachnotron in front of you and then carefully make your way around the circular pit. Walk across the walkway to the center and press the Button on the pillar. This raises up stairs to the Arachnotron so you can grab the Super Shotgun.

Head through to the next area to the west and take out all the Arachnotrons as they appear. Use the Unmaker to deal with them quickly.

Once the area is clear continue to the west to the room of pillars and then south. Open the door on the east wall and then the wall behind it for Secret #1. Press the Button to lower the Backpack. This is Secret #2. The roof will turn into a crusher so get out of there quickly.

Go down the stairs to the bottom and press the Button on the far wall. Four pillars will lower down and when they raise up 4 Hell Knights will appear. 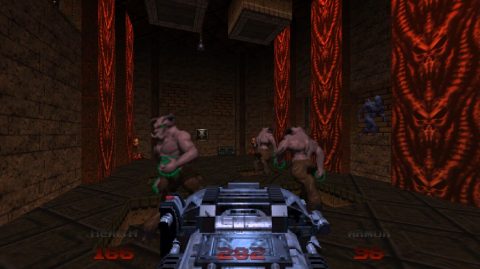 Head up the stairs going around the outskirts of this room. Once the enemies are clear press the two Buttons you pass while going up the stairs to open up a wall at the top and lower down the Blue Key. Jump out through the window to grab the key.

Walk up the steps just to the left of the key and go through the Blue Door. Steps forwards to lower the small walls in the room and then step back again. Take out the Arachnotrons using the door for cover.

SAVE your game before attempting to grab the Rocket Launcher. The floor will lower and an arrow trap will be set off. Stand right in the corner of the depressed section to avoid getting hit. After a few seconds it will lift up again.

Go down the stairs and open the brick wall to be taken back out to the stairway. If you need health go up the stairs and look out the window to the central structure. Shoot the strange symbol and it will change into a Supercharge and lower down. This is Secret #6. Drop down to pick it up. 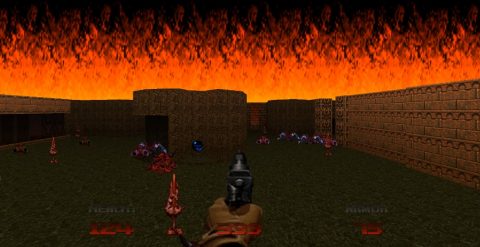 Make your way to the Yellow Door which is up on the ledge overlooking the large courtyard. Go through and kill the Arachnotrons and Zombiemen. There is a Supercharge in the center of the room if you need the health.

Open the door to the next room and grab the Red Key. The walls in the corridors will quickly move towards you trapping you in. 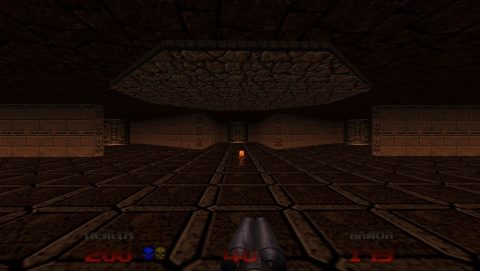 Now that you have the Red Key you can head towards the Exit but you might want to grab the final two secrets. Go up the stairs to the Blue Door and open the wall to Secret #3. Step onto the teleporter to be taken to Secret #4 where you can dash across to the Mega Sphere in the slime pool.

With that done go back to the large courtyard and open the Red Door to the north. Kill the Arachnotrons and hit the Exit Button.