Sacrificial Lamb is the final main case aside from A Mother’s Love. It becomes available after opening the Cabinet of Curiosities in Stonewood Manor. Verner Vogel will invite you to Kurt Mancio’s Mansion on Turquoise Ln across from the Cordona Abbey in Northern Grand Saray. 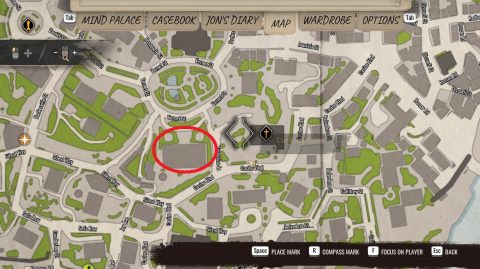 You’ll be given some clothes to wear so open your wardrobe and put them on. It includes the Prince of Darkness outfit and the Face Mask. 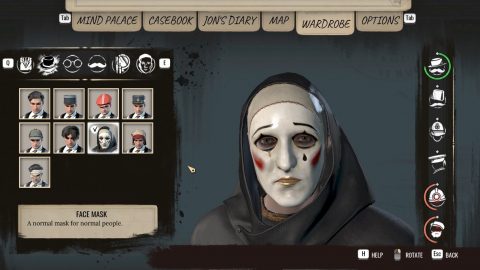 Make your way to the mansion and enter through the main gates on the north side.

When you enter Jon will give you a challenge to gather information about Cordona’s elite. To do this you’ll need to eavesdrop on two conversations. They can be found in a small room on the left side and out in the foyer on the right side.

Once you’ve taken a look around enter the small room to the back left to speak to Verner Vogel. He’ll give you the key to the altar room. Go back to the foyer and open the large white doors at the end of the room. 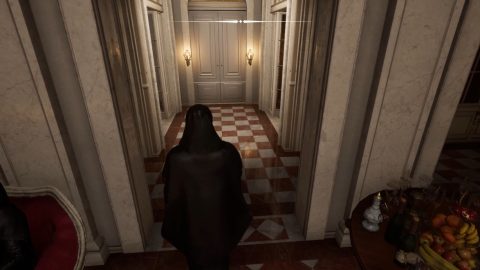 When you enter the altar room you’ll immediately see the body of Fabio on the altar. Go up to the body and examine it for clues. There are 6 clues in total, a sigil, dagger, head wound, tattoo, chest wound and clenched fingers.

Behind the altar you’ll find some clues on the stone shelf, as well as symbols painted on the wall. 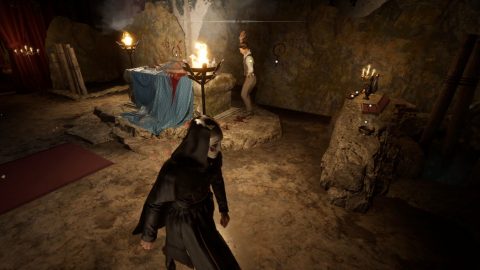 Enter the small side room, the smoking lounge, for more clues. You’ll find cigars, a whip, bottle wine and a blood stain.

Go through the door into the next room, the dressing room, for another few clues. You’ll find a missing robe, and two clues in the sink.

Look at the desk for a book, letter and tool rack. The desk to the left has more clues, a key, mask and gift. Open the cabinet next to the table to find some bloody clothes.

Pin the clue “Smoking Lounge” to your screen and use concentration to look at the blood print on the chair and door frame.

Go back out to the altar room and talk to Verner. Ask him about everything and then you’ll have the chance to recreate the events of the evening. Go back over your casebook if you need to remind yourself of the clues.

After Sherlock figures what happened open up the Mind Palace and connect the clues together. Talk to Verner Vogel again and then head back out to the foyer.

You’ll need to speak to the host of the party because he knows who has keys to the altar room. You’ll find him in the center of the room by himself. 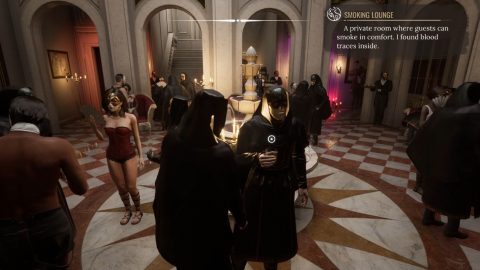 During the conversation the police will arrive and arrest everybody.

After talking with the officer in the interview room take a look at the letters, evidence tickets and keys on the table. Open up the Mind Palace and connect up all the clues.

Go to the evidence room and present your ticket so you can look through the belongings of the suspects. 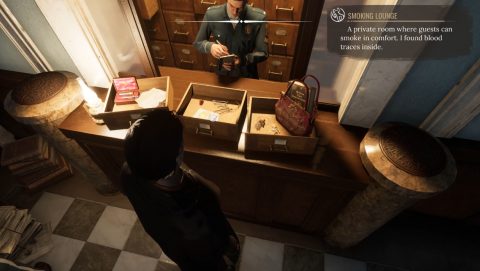 Examine all the evidence from each of the drawers. Next head over to the archives and speak with Police Officer Oswald. You’ll tell him that Santos is a suspect and he’ll go and arrest him so he can be questioned.

All of the suspects can be found in the upper cells. Verner can be found at the end of the corridor but doesn’t have much to say at the moment.

Santos is the new suspect and he and his belongings can be found in cell #7. Examine the drawer on the table for a set of keys and Kurt’s will. 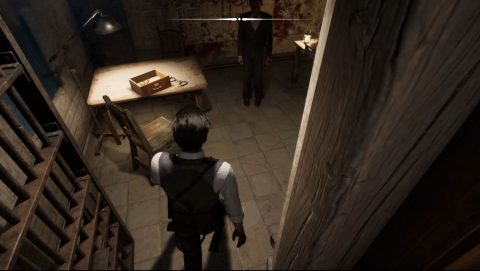 Observse Santos to find out he has “Financial Difficulties”. Ask him about everything and all the evidence to hear his side of the story. Apparently he is related to Kurt but gets treated like a lowly servant.

Matista can be found in cell #6. Observe her to find out she “Punishes herself for the past”. Present all the evidence to her and find out what she has to say.

Kurt Manchios is the owner of the mansion and should have a good idea what’s going on. He’s in cell #5. Do a character portrait of him to find out he “Hides his age”. Present all the evidence to him and he’ll reveal some new details.

Once you’ve spoken with everyone open up the Mind Palace and start piecing the clues together. Speak with Verner about what you’ve learnt so far and then do a round of all the suspects to see if they respond to any new evidence.

Eventually you’ll need to find someone guilty. The clues in the Mind Palace will point to Santos Pinchetti, Matista or Kurt Manchios.

Here are the Mind Palace conclusions implicating the three suspects: 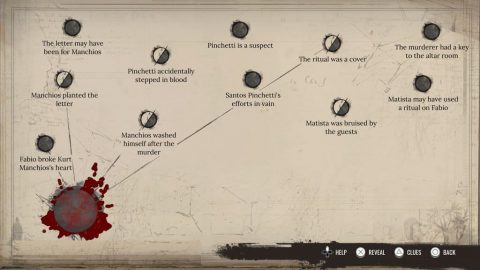 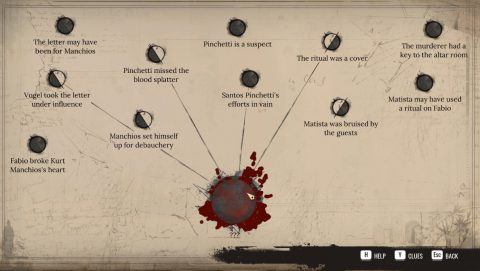 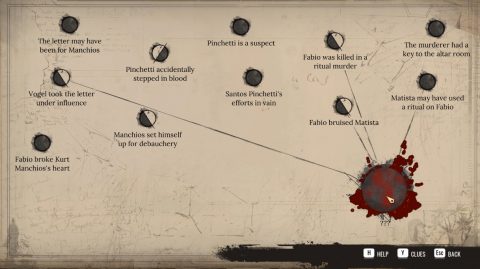 Once you have decide who is guilty speak with Police Officer Oswald in the archive room. He’ll share the missing case file on your mother’s death with you as a reward.