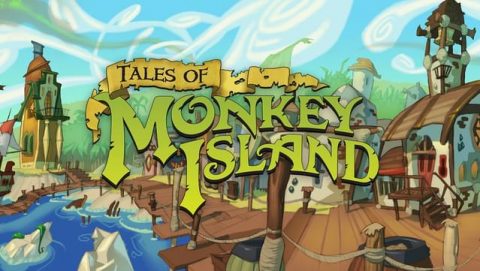 Tales of Monkey Island is the fifth and final game in the series. It was developed and published by Telltale in 2009 and once again features our bumbling hero Guybrush Threepwood.

Guybrush strips LeChuck of his demonic powers but is himself infected. He’s pursued by pirate monsters and a creepy physician who believes Guybrush holds the secret to eternal life.

Tales of Monkey Island was released in 5 chapters with each of the chapters being about 3 hours in length. Unlike the previous games this installment is all in 3D. It features some superb voice acting with lots of puns and jokes.

Use the WASD keys or click the LMB (Left Mouse Button) and drag the mouse to move. Hold RMB or the Shift key to run.

To pause the game press the Space Bar and press ESC to open the menu. From the menu you can change the hint frequency and subtitles.

At some points during Chapter 4 and 5 the game will crash when you enter certain locations like the jungle. To avoid this remove or delete the .dlg and .chore files from the Chapter 4 and Chapter 5 folders in the Tales of Monkey Island game file location. This doesn’t seem to effect gameplay at all and allows some of the cutscenes to play.

Chapter 1: Launch of the Screaming Narwhal

Chapter 2: The Siege of Spinner Cay

Chapter 3: Lair of the Leviathan

Chapter 4: The Trial and Execution of Guybrush Threepwood

Chapter 5: Rise of the Pirate God