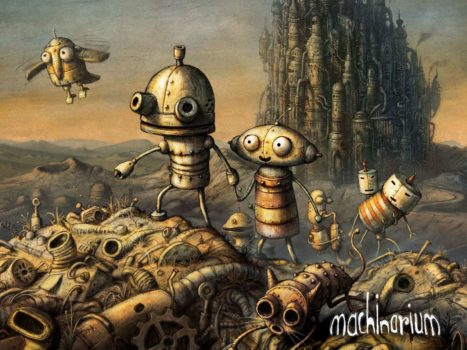 Machinarium by Amanita Design is a puzzle adventure game first released in 2009. The story focuses on one lone robot, Josef, who is dumped on a scrapheap and needs to be reassembled. Once he’s put back together he travels to the city and discovers a plot by three criminals to blow up the city. Josef is discovered and locked up but manages to escape. Along the way Josef will find his lost love, Berta, who has also been captured and forced to work in a kitchen.

This game is beautifully designed and is much like the other puzzle games by Amanita Design such as Samorost 3 and Botanicula. The marketing budget for Machinarium was unbelievably low, at just $1,000. In spite of that it has won numerous awards for aesthetics and and soundtrack. A full walkthrough of Machinarium is shown below.

Machinarium was released in October 2009 by Amanita Design for Windows, Linux and OS X. During later years versions were also released for Android, PlayStation 3, PlayStation Vita and BlackBerry.

Machinarium has received numerous awards including Excellence in Visual Art, PC Game of the Year 2009 Runner-up, Best Independent Adventure, Best Graphic Design and Aesthetics. The Collector’s Edition of Machinarium can be still be purchased, along with the other adventure games by Amanita Design, here.