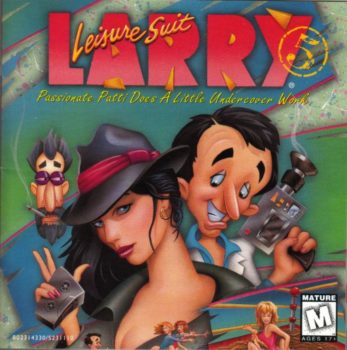 Leisure Suit Larry 5: Passionate Patti Does a Little Undercover Work is the third sequel to the highly popular text based adventure game, Leisure Suit Larry. You’ll switch between two characters, Larry and Patti, throughout the game. There’s no way to die and both characters can never be trapped, meaning there’s always a way to progress with the game.

Leisure Suit Larry 5 is very enjoyable although a little easier than previous adventure games. If you get stuck follow the walkthrough below which includes a full description of how to achieve all 1,000 points. The copy protection for booking a ticket at the ATM is found in the Aerodork’s Travel Brochure which you can find here.

After the intro grab the coffee and walk into the meeting room to the left. Larry will be selected for a special mission to interview 3 women for a television show. After the meeting get a drink of water and then look at the trophy to the right of the water cooler. Walk into the file room to the north and pick up the AeroDork Gold Card that was left on the imprinter to the left of the door. Open the drawer on the right and pick up the 3 Files. Open your inventory and look at each of the 3 files to find information on the contestants.

Leave the room and enter the tape room to the top left. Use the large barrel of disinfectant and use the 8-track player to select a song. Pick up the 3 Tapes on the table next to the monitor at the bottom of the screen. Open the drawer on the left and take the Battery Charger.

Leave the room and plug the Battery Charger into the outlet by the coffee machine. Plug the Camera into the charger and wait till it’s full. You can look at it to see whether it’s fully charged or not. Once it’s full pick up the Camera and Charger.

Leave the building by walking to the right, look at the statue and then get into the limousine. You’ll be taken to the airport.

Look at the ATM and then insert the AeroDork Gold Card into the slot. Select New York and take notice of the time of the flight. Enter the code for that flight, then take your Boarding Pass and AeroDork Gold Card. Enter the airport. Show your AeroDork Gold Card to the camera next to the door to be let into the lounge and enter. Wait for the boarding sign to light up and then use the Boarding Pass on the scanner next to the door. Once you’re on the plane take the Magazine from the back of the seat in front of you and read it. After a few seconds Larry will drift off to sleep.

Inspector Desmond will hire Patti for an important mission to gather information about corruption in the music industry. Once you reach the FBI Lab look at the men conducting the experiments. Walk to the right and Desmond will give you your FBI details. Look at the man conducting the third experiment and then walk through the door to the left to be fitted with a locator.

When the ordeal is over pick up the 2 Data Tapes and DataMan from the table. Walk left and pick up the Hooter Shooter. Look at it and then use it on yourself to put it on. Walk through the door to the north and enter the limo. Pick up the Wine Bottle. Open your inventory and place the Reverse Biaz Tape into the DataMan. Show the DataMan to the driver and he’ll take you there.

Leave the lounge and take a Quarter from the Jerry’s Kids jar. Look at the advertisements on the wall to find the number for Checker Limo. Walk to the phones on the east side and use the only working phone to call for a limo. leave the airport and enter the limo. Take the Ledger Book from the seat just to your left. Open your inventory and look at the Ledger Book to find Cash and Credit Cards. Show the Napkin to the driver and he’ll take you to the cafe.

Walk behind one of the plants and Larry will take a pee. You may need to wait until you come out of the cafe. Enter the cafe and talk to the maitre d’ a few times until he agrees to give you a Membership Tape. Use the Membership Tape on the music box to the bottom left side of the screen to upgrade your membership.

Back in the lobby turn the Camera off and place a new Tape in the Camera. Use the phone to call the Limo company, go outside and get in the limo.

Use the ATM and get a Boarding Pass to Atlantic City. Use the code from the Aerodork’s Travel Brochure depending on the time of your flight to pass the copy protection. Enter the airport and walk to the west. Use the power outlet to recharge the Camera and then go into the VIP Lounge. When you are called use the pass to board the plane.

Walk into the lobby and look at the building directory on the left. Take note of the listing for des Rever Records. Talk to the guard to wake him up and then quickly show him the DataMan before he falls back to sleep. He’ll call the elevator for you.

Use the keyboard to record a song. You have two takes to play whatever you want. On the third take Patti will play automatically and the song will be recorded. When you and Biaz are in the control room together give him the Wine Bottle. He’ll get drunk and give you a Cassette tape.

Back in the limo open your inventory and take out the Reverse Biaz Tape from the DataMan. Put in the K-RAP Tape and show it to the limo driver.

Speak to the woman outside the casino and play the guessing game for 10 Silver Dollars. Use the machines to play video poker until you have at least $525. Save and reload each time you lose. Enter the showroom at the back right and pay the bouncer to go in. After the show head outside and walk east along the boardwalk until you see Ivana Skates.

Go inside and rent a pair of Skates. Leave and wear the skates. Skate around the boardwalk until you see a beautiful woman called Lana. Bump into her and talk with her a few times until she invites you to the mud wrestling.

Skate back to Ivana Skates and hand in the Skates. Walk back to the casino and enter the showroom at the back left. Pay the bouncer enough to participate in the wrestling. When you sit down quickly turn on the Camera before you’re called to the ring. When you get in the ring click on the body parts that flash up on the screen. Soon you’ll wrestle Lana to the floor. After the match leave the casino. Turn off the Camera and speak to the man outside the entrance who’ll call a limo. Get in the limo.

Use the ATM to get a Ticket to Miami. Enter the airport. Walk to the west and use the power outlet to recharge the Camera. Enter the lounge and wait to board the plane.

Enter the building and look at your DataMan. Use the code on the keypad next to the door to unlock it and go through to the office. Pick up the Letter Opener from the desk and search the base of the pot plant to find a Key. Use the Key to open the drawer at the back of the desk. Inside you’ll find a blue stickum with a number. Take note of the number because you’ll need it later. You’ll also find a file. Take the File and look at it in your inventory.

Use the File on the photocopier to make a copy of the contents. Return the File to the drawer, the Key to the pot plant and the Letter Opener to the desk. Open the door to the left and go into the bathroom.

Enter the shower, which is actually a lift, and you’ll take the lift down to the studio level. Take the Clothes and wear them and then walk to the right. Look at the doors and use the keypad to unlock the door to Studio B. The code for the studio is the number on the blue stickum note.

Take a Tape from the rack at the back and put it in the recorder on the table to the right. Use the control panel a few times until you can hear the sound from both Studio A and Control Room A. Click on the tape recorder to start recording. PC Hammer in the studio next to you will notice that you’re recording and block the door.

Stop recording and rewind the tape (click twice on the tape recorder). Take the Tape. Move the microphone so that it’s in front of your mouth, use the control panel to turn it on and then sing until the window breaks. Patti will climb out of the window and make her way back to the FBI Headquarters.

Walk to the left and take the Quarters from the vending machine. Look at the signs to find the numbers for Just Green Cards and North Beach Limo. Use the phones to the right to call both of them to order a green card and a limo.

Go outside, pick up the Green Card from the bin and get in the limo. Show the Business Card to the driver to be taken to the dentist’s office.

Pick up the Doily from the table and then use it on yourself to wrap it around your head. Knock on the window again and you’ll be given an appointment immediately.

When you’re with the dentist look at her and then turn on the Camera. Talk to Chi Chi until she tells you that she’s an illegal alien. Give her the Green Card and she’ll take you downstairs for a ‘workout’.

Once that’s done turn the Camera off and return to the reception area to call a limo. Head outside and get in the limo to be taken back to the airport.

Use the ATM to buy a Ticket to LA. Enter the lounge and get on the plane when you’re called to board. You’ll fall asleep and recap Patti’s mission.

During the flight the pilot refuses to fly because his contract has run out. Larry will decide to try and fly the plane himself. When you see the cockpit click around on all the buttons until you hit the ‘autopilot’ button. Once you’ve save the day you’ll switch to Patty in the White House.

Once Larry and Patty are back together Patty will figure out that Mr. Big is really Julius. When he pulls out a gun use the Hooter Shooter to complete the game.