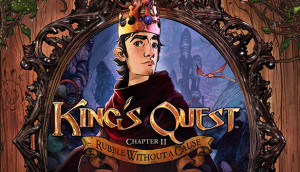 This chapter focuses on the exploits of King Graham as he tries to rescue the townspeople from the rock goblins. This chapter is played almost entirely in the Goblin Caves which does give you a slightly more claustrophobic feeling compared to the last chapter.

I won’t give you any spoilers but if you are looking for a walkthrough click the link above for a full walkthrough. I do plan on playing through again taking the different paths as there are some parts of the game I’ve not yet fully explored.

The complete playthrough of this chapter will take a little over an hour. Much longer if you need to figure all the puzzles yourself. It feels smaller because of the setting but it will probably take about the same time to play as the first chapter.

You can see the walkthrough of King’s Quest Chapter 2 here.

Tagged with: kings quest chapter 2 • rubble without a cause