Ultima I: The First Age of Darkness 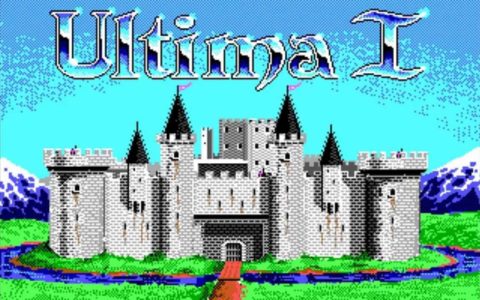 Ultima I: The First Age of Darkness is the first game in the Ultima series and was officially released in 1981. It revolves around your quest to free the lands of Sosaria from the evil wizard Mondain by destroying the Gem of Immortality. In the first game you’re only known as ‘The Stranger’.

Ultima I is the first open-world RPG game and one of the first RPG games to be commercially developed. Many of the game mechanics and plot-lines are derived from Akalabeth which had a limited release a few years earlier.

While the graphics have aged Ultima I is still a great little game that can be finished in a couple of hours by following the walkthrough below. Once you’ve finished with this game make sure you check out Ultima II: The Revenge of the Enchantress.

Your character starts with 10 points in all 6 of the main attributes (Strength, Agility, Stamina, Charisma, Wisdom and Intelligence). You have 30 points to distribute among these attributes. They have a range of 10 to 99 and some of them are more important than others. Here’s what they affect.

The gender of your character has no affect on your statistics however the Race will modify your starting attributes.

There are 4 classes in Ultima I and they modify your starting attributes a little. The 4 classes are Fighter, Cleric, Wizard and Thief.

Characters always begin the game with 1 Gold Crown (100 Copper), 200 Food, 2 Daggers and Leather Armor. You’ll use food when you travel over the overworld but not when exploring dungeons. 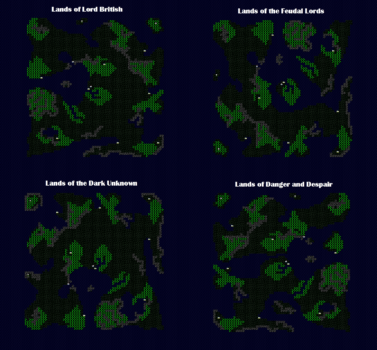 You begin in the Lands of Lord British. Each land has 2 Castles, 8 Towns, 9 Dungeons and 2 Signposts. Visiting each of the Castles and speaking with the King will give you a quest. There are 8 quests in total.

The first thing you’ll want to do is to build up your character by increasing your Health Points and getting better equipment. You gain Health Points by visiting a King and paying for his services or whenever you leave a dungeon. The amount of HP you get when leaving a dungeon depends on the number of experience you gained while in the dungeon.

The Town of Britain and Castle of Lord British is just west of your starting location. Visit the town to get some better equipment. An Axe is good and Chain Mail if you can afford it. For the time being you’re stuck on the Lands of Lord British until you can afford to buy transport such as the Aircar or Frigate to get over the sea.

One King on each continent will give you a quest to kill a certain monster. When you complete these quests return to the King for a reward of a certain coloured gem which you’ll need later. The four other quests are to find a specific signpost. These are optional quests.

Visit the King in the northern castle, The Castle of the Lost King. Speak with the King and he’ll give you the quest to kill a Gelatinous Cube which can be found on level 3 or 4 of any dungeon. These cubes can destroy your armour if they hit you so take off any armour you’re wearing before descending down to level 3. Once you’ve killed the Gelatinous Cube return to the King for your reward, a Red Gem.

Signposts: The two signposts on The Lands of Lord British are the Pillars of Protection (Agility +10%) and the Tower of Knowledge (Intelligence +10%). They can be found on islands in the north. You can return to signposts after visiting another signposts. Keep going between them until both your Agility and Intelligence are at 99.

Once you have enough money for an Aircar buy it and fly over the ocean to the east for the next island.

Lands of the Feudal Lords

Visit the Castle of Rondorin for your next main quest. The King will tell you to kill a Carrion Creeper. They can be found on level 5 or 6 of any dungeon. Now that you are going deeper into the dungeons it’s worthwhile purchasing the Ladder Up and Ladder Down spells to quickly move between floors of the dungeon. When you have killed the Carrion Creeper return to the King for the Green Gem.

Signposts: The two signposts can be found on islands on the western edge of this land. The Pillars of the Argonauts will give you the weakest weapon that isn’t already in your inventory and the Pillar of Ozymandias will give you Wisdom +10%. After visiting them a few times you should have the best weapon in the game, the Blaster.

When you are finished with this land travel over the sea to the south.

Lands of Danger and Despair

When you reach the Lands of the Dark Unknown visit the Black Dragon’s Castle. Speak with the King for a quest to kill a Lich. You’ll need to work your way down to level 7 or 8 of any dungeon. Return to the King for the Blue Gem.

When you are finished with this land travel over the sea to the west.

Lands of the Dark Unknown

For the last main quest visit the Castle of Shamino for the quest to kill a Balron which can be found in any dungeon on level 9 or 10. Return to the King for the White Gem.

Signposts: The two signposts can be found on islands to the west and north-west. They give you Stamina +10% and Charisma +10%.

By now you should have all 4 Gems but before you can confront Mondain you’ll need to take a trip into outer space. Yes, space!

Make sure you have at least 2,000 Gold and purchase a Shuttle. You’ll also need to have either the Vacuum Suit or the Reflect Suit or you won’t be able to survive the trip.

Board the Shuttle and dock at the Space Station. Docking at the station costs you 500 Gold and you need to dock every time you want to refuel or change ships.

To travel between systems you need to switch to front view and enter Hyperspace. Systems marked with a + sign have a Space Station, systems with a H have hostile enemies, systems with a circle have a sun. Other systems are empty.

Each action you perform consumes fuel so try to only move when you see enemy craft appear. Once you have killed 20 enemies return to your Shuttle and take it back to Sosaria.

Return to the Castle of Lord British, or a castle that looks the same, and kill the Jester. He’ll drop a key that will hopefully open the cell to the Princess. Sometimes the Jester drops the wrong key. Killing the Jester will make the Guards hostile so you’ll need to kill or evade them.

Free the Princess and lead her outside where she’ll give you a reward, information about a Time Machine near in the northwest. You should be able to see it once you get close to it on the map.

As you have the four Gems you’ll be able to use the Time Machine. At the end of your journey you’ll come face-to-face with Mondain.

Mondain is in the process of crafting his Gem of Immortality. Walk over to it and press G (Get) to destroy the gem, although it will take away a lot of your HP.

Without the Gem of Immortality Mondain is now vulnerable. Shoot him with your Blaster until he turns into a Bat and tries to fly away. Follow him until you can corner him and kill him. Once he’s been defeated you’ll win the game!