Enter the ship through the doorway on the left. Walk down the ladder and you’ll be attacked. Glottis will save you just in time.

Push the Red Button on the starboard (right) side to raise that anchor. Use the controls and push the Left Arrow. The ship will veer to the left. Push the Red Starboard Button to lower the anchor and press it again to raise it once more. It will catch on the port side anchor.

Look out of the window on the starboard side. You’ll see both anchors tangled together. Use your Scythe on the anchors to attach them to the window. Push the Port Side Red Button to pull the anchor and tear a hole in the wall. Now use the Controls and push them forwards to tear the ship apart.

You and Glottis are now underwater with the shipwreck. Try to leave the lit area and Glottis will convince you to stay out of the darkness. Eventually a little man with a light will walk past. For a bit of fun ask him for help and he’ll lead you around in a large circle while singing a song.

To get out of this area click on the man to talk to him. End the conversation and click on him again to try and grab him. You only have a few seconds to click on Glottis and Glottis will pick him up for you.

When you come to The Pearl, which is guarded by a giant octopus, walk around the ridge to the right. There’s a rock with some strange red suckers on it. Walk up the screen on the right side of the rock and Manny will walk around it. The little guy will try to follow and get stuck. The octopus will grab him while Glottis and Manny get on board The Pearl.

When you arrive go through the door at the top of the screen. Go right along the walkway, up through the hallway to Meche’s room, to the left of the room and then take the door to the outside.

After the cut-scene you’ll be in a little room with two kids in a cage. Talk to the kids and tell them that you want to help but don’t have those little tools that they’re using. One of the kids will throw you a Tiny Hammer.

Pick up the Tiny Hammer and leave the room. Walk to the right and then up to Meche’s room. Talk with her if you want. When you’re done use the Ash Tray to smoke a cigarette. Meche won’t see that you’ve moved it and will get ash on her stockings. She’ll throw them in the bin. Pick up the Stockings from the bin.

Leave the room and take the lift back down to the underwater area. Walk to the bottom of the screen and then go left. You’ll see the strange little man with the light. Talk to him and then trade the Tiny Hammer for the Drill and the Stockings for the Sprouter.

Climb back up the chain and make your way back along the conveyor. This time walk up the conveyor all the way up the screen and out of the water. Climb up the ladder on the left to the crane controls.

Move the crane all the way to the right side and then exit the crane. You’ll see a chain attached to a metal scoop. Walk down to the beach and use the Drill on where the chain attaches to the scoop to disconect it. 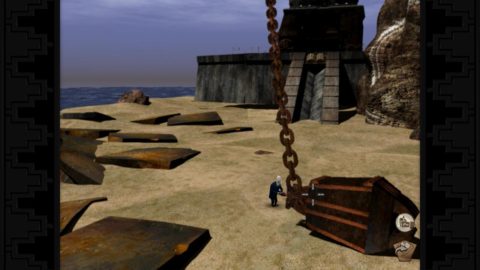 Climb up the conveyor belt and into the crane. Operate the crane to raise the Lamancha from the ocean floor and rescue Glottis as well.

Take the crane to the other side, exit and make your way back to Meche’s room. Talk to her and give her the Sprouter. Cut-scene.

After Meche is captured leave the room and look at the metal door with the wheel. Use the Drill on the right side of it to open up the lock mechanism. Put the drill away and use the wheel. 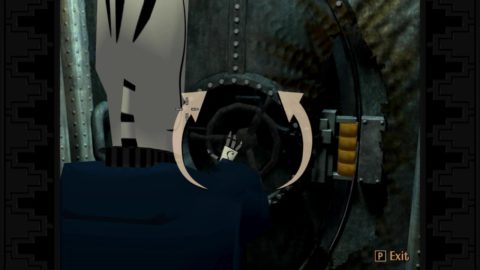 Exit and use use the Scythe on the tumblers to keep them in place while you open the door using the handle on the left. Enter the room and close the door.

Use the Scythe on the yellow wiring just at the top of the door. This will open up a secret room and Meche will come out. Follow Meche into the tiled room and use the Scythe on the Sprinkler system above the center of the room. Use the small wheel on the right to turn off the water and drain the puddle. Take notice of which tile the water is draining into.

Walk into the first room, go down and pick up the Axe. Manny can’t move it far but drag it into the tiled room and drop it down while Manny is standing on the center blue tile. The tile behind Manny will break. 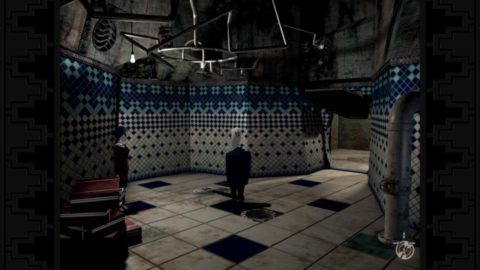 Manny, Glottis and Meche will make their escape on board the Lamancha. Dom will arrive and challenge Manny to a duel. Instead of attacking Dom use the Scythe on the octopus’ eye just behind Manny. Manny will be saved and the three of you will sail off for another year.

Next: The Ninth Underworld