The only settlement on Earth in the time 2112 AD is the Pirate’s Harbor. It’s found on the northern coast of what would be Europe. If you kill the guard protecting the rockets you’ll be attacked by all the guards to the north. 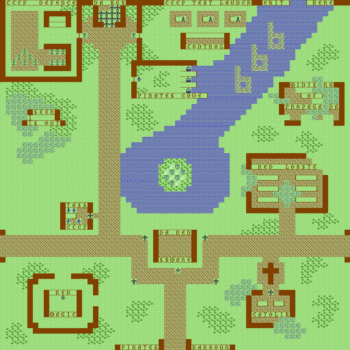 Instead open the door to the Pirate’s Cove harbour, kill the one guard and take a ship. From here you can use the cannons to kill all the guards when they come after you. Get into one of the rockets and Hyperspace to planet 9-9-9.

When you arrive on the planet land on the grass somewhere near Towne Basko. Speaking with the inhabitants will give you further confirmation that Father Antos is on the planet. You can also use two keys to get access to a Frigate which will help you to explore the rest of the map.

Make your way north to Castle Barataria. Speak to the King and Queen and then open one of the doors behind them. Walk to the west then south through the jail and then into the chapel. This is where you can meet Father Antos. 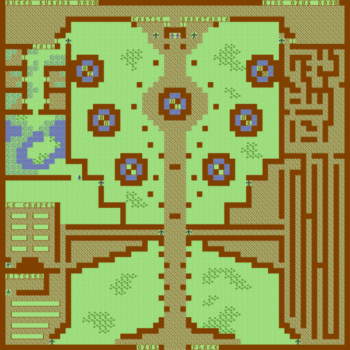 When you speak to Father Antos he’ll give you his blessing and tell you that you can return and claim the ring.

Fly back to Earth by using the coordinates 6-6-6. Fly to the Time Gate in North America and go through it. You’ll be taken to South America in 1990.

Make your way to New San Antonio and speak to the old man in the north of town. Give him 500 gold and he’ll give you a Magic Ring. The ring is needed to survive in the Time of Legends.

With the Ring, the Quicksword and as close to 10,000 Hit Points as you can you’ll be ready to face the evil Enchantress Minax. If you’re still in 1990 AD fly to Australia and go through the Time Gate there to be taken to the Time of Legends.