Once you enter Level 6 you’ll be trapped inside and won’t have access to the stairs up until you complete the level. Not only will you be attacked by numerous Giant Spiders but an Ogre roams these halls as well! The Crystal of Life won’t be accessible until towards the end of the level so try to keep all of your characters alive for as long as possible. 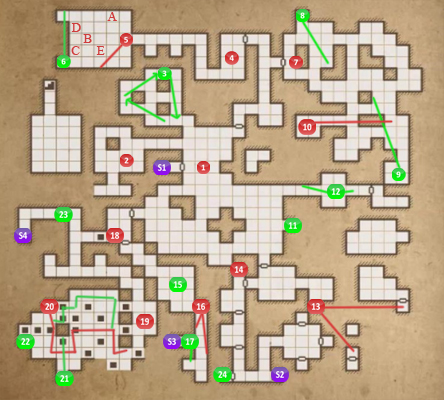 1. When you stand on the Pressure Plate the Gate behind you will close and 3 Giant Spiders will spawn around you. Keep moving and try to kill one of them as quickly as possible but watch out for the Ogre! The Ogre drops his Hammer, a Sack of Food and a Gold Key which you can use to open one of the treasure stores at the end of the level.

2. Another Giant Spider Hatchery. Kill the spiders and then look for the Cutlass in a small niche.

3. Walkabout. From the runes in the wall walk clockwise around the outside of the pillars. The first time you’ll be given a Rock, the second time a Skeleton Warrior will appear and the third time you’ll find a Sack with a Speed Potion and the Speed Potion Recipe.

4. Giant Snail Room. This is a good place to stock up on food as the Giant Snails are quite tasty. They will continue to spawn in here so make sure you close the door when you leave.

6. Once you press the Button at #5 a Teleporter will be deactivated so you can reach the secret here. Go through Teleporters D and then E to reach this alcove where you’ll find the Spirit Mirror Pendant. It increases the rate at which one of your characters gains experience by 25%.

7. Haunted Halls. Skeletons roam these halls and they will spawn continually from time to time.

8. Press the Button on the wall to open an alcove and release a group of Skeleton Warriors. Inside you’ll find the Heavy Shield and Ring Boots.

9. This Button opens up a room to the south that releases 2 Skeleton Archers. Inside the room you’ll find a Frostbite Necklace.

11. Place a Torch in the empty Torch Holder to open up a passage just to the north.

12. Inside you’ll be attacked by a Skeleton Warrior and find 2 Fire Bombs but this is not the real secret. Look at the wall to the north for a stone with a carved rune on it. Press it to open the wall to the east and stand on the Pressure Plate. This activates a Teleporter. Place, don’t throw, an item down in the Teleporter to open the Gate on the other side. Walk to the end of the passage east for the Orb of Radiance. When you pick it up 2 Giant Crabs will spawn. Try to kill the first one as quickly as possible, then run to the room with the Pressure Plate where you can manoeuvre around to kill the second Giant Crab. To exit press the stone with the rune carving.

14. You can use one of your Round Keys to get access to the Crystal of Life.

15. Kill the Giant Crabs and then drop down the pit at point #15. This takes you to a secret which forms a mini-dungeon that spans the next two levels. 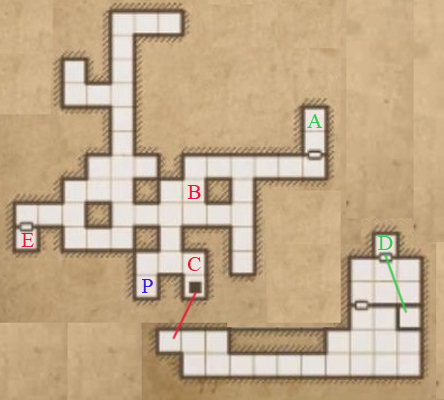 From the pit at #15 you’ll drop down to A in the level below. When you take the Lurker Pants and Shuriken from the shelf the Wooden Door will open and you’ll have to face Crowerns and Wyverns. On the shelf at B you’ll find clue for how to find the next treasure. You’ll need to jump into the western most pit on level 6 (#22) to land at point E. The Gate will open after a few seconds and after defeating the Giant Crab you’ll find the Crown of Kings.

P is the portal or teleporter that takes you back to Level 6. Drop down the pit at C to head down to Level 8. There’s a Gate here with an enclosed Pressure Plate. Place something on the corner closest to the closed area to open the Gate. This closed the alcove at point D. Kill the Scavengers, go inside the cell and then remove the item from the Pressure Plate to open the door. Inside you’ll find Lightning Bombs. Take the teleporter back to the upper level.

16. When you walk on the Pressure Plate the Daemon Statue will begin shooting fireballs. In the shelf at the end of the corridor, right next to the statue, is the Scroll of Fireball and the Fireblade. Press the small Button on the right to open the first alcove and the Button on the left further down to open the second alcove. You should now be able to dodge the fireballs and pick up the goodies from the shelf.

18. Mage’s Entrance. Throw something on the Pressure Plate on the other side of the pit and dodge the fireball. Shoot a fireball back at the Daemon Statue to close the trapdoor.

19. There’s a rather difficult puzzle for the last Round Key but before you can figure out how to get to it you’ll need to kill another 2 Uggardians.

20.  Press the Button on the southern side of the middle pillar to close a trapdoor for a few seconds. Quickly run up to it and press the next Button. The path is shown on the map. Run around the pillar and pick up the Torch from the wall first of all to close the trapdoor next to you so you can get out and pick up the Round Key from the shelf. When you do another 2 Uggardians will be released.

21. Push the Buttons again but this time you’ll need to push another 2 Buttons and do a complete lap of the room. The path is shown in the map above. Once you press the Button in the middle pillar on the southern side for the second time the alcove at #21 will open. Go inside for the Sword of Nex. You’ll need this to access the Fighter’s Challenge.

22. Drop down this pit and you’ll land in a single cell with a Giant Crab smiling at you. After about 10 seconds the Gate will open and you’ll have to fight the crab. Once he’s been killed you’ll be rewarded with another treasure, the Crown of Kings. Pull the Lever to get back to the secret part of Level 7 (#15) and take the Teleporter back to Level 6.

23. Fighter’s Challenge. Press the stone with the rune on it to reveal the stairs leading down to the fighters challenge. The door at the bottom of the stairs won’t open unless you have the Sword of Nex from #21. Once you have it walk towards the daemon statue to be teleported. Make sure you’re all healed up and have plenty of potions handy for this difficult fight.

You’ll be immediately teleported into a room filled with Scavengers. Try to fight your way into a corner where you’ll at least only be attacked on 2 sides. Use your Bombs to thin out the Scavengers. Frost Bombs work well to freeze groups of them for a little while. If you can get through the fight with at least one character remaining search the room for the Gold Key and some Bombs. Use the Gold Key to open the Gate for the Shield of Valor.

Search the western wall for a secret Button. Press it to open an alcove with the fourth treasure, the Ancient Aparatus. Now take the Teleporter back up to Level 6.