The Vault is entirely optional as the S1 and S2 staircases are located very close to one another. If you skip it however, you’ll miss out on one of the most powerful weapons in the game, the Dismantler Sword. 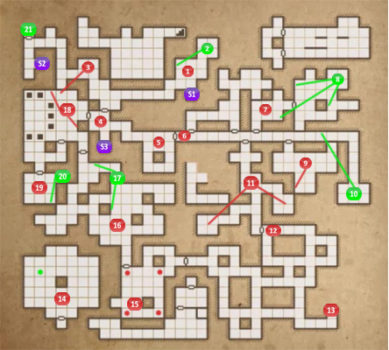 1. Scroll of Shock Shield in the niche and 2 Cave Nettles on the floor.

2. Press the Button to open a wall that releases a Giant Spider. Inside the room you’ll find the coveted Blueberry Pie! Unfortunately there’s not enough for everybody. There’s also a Grim Cap and Milkreed on the floor.

3. Crystal of Life. Behind the gate is one of Toorum’s Notes.

4. This is where you arrive if you take the secret staircase from Level 7. You’ll need to go that way at least once to open the gate here as it can only be opened from this side.

5. Ogre Trap. As you round this corridor the central walls will open revealing an Ogre and Uggardian. Retreat back to #4 to defeat them one at a time.

6. Lightning Conduit. Lightning bolts will fly from one end of the conduit to the other. Once you open the gate you’ll be exposed. You’ll need to make your way down the corridor, taking safety in the various passages along the way, until you reach you the other side. Pull the chain on the left and enter the first passage. After killing the Uggardian you’ll find a Lever to open the next gate along and 3 Lightning Bolts.

8. Search the area for 3 Buttons. Each of them opens an alcove with a Pressure Plate behind it. Place an item on each Pressure Plate to open the secret at #8 where you’ll find Plate Guantlets and Plate Boots.

9. Enter this room and kill any remaining enemies that haven’t been killed by the Lightning Bolts. A Lever on the wall opens the door to area #11 but before going there press the little stone Button on one of the walls to open the exit closer to the end of the conduit.

10. Press the stone Button on the wall in the conduit to open the final passage. There is an Ogre in the room. If you get lucky you can quickly run into the room where you have space to fight him. If not he may be in the corridor, making fighting him much more challenging. Inside you’ll find the Gear Key for the Iron Door and a Lightning Rod. The shelf across from the Lightning Conduit has 3 Lightning Bombs.

11. Make your way back to area #11. Kill the Giant Spiders and explore the areas to the east and west to find Throwing Axes, Frost Arrows and another one of Toorum’s Notes.

12. Fighting the Uggardians and Ogres around these corridors is difficult because there’s no space to sidestep. You eventually want to make your way down to the Teleporter at #13. Along the way you should find Tar Bead and Lightning Bombs.

13. Make sure you rest and prepare some potions before stepping into the Teleporter as it will take you straight to a big fight with Herders at #14.

14. There’s a dozen or so Herders of all different kinds. They shouldn’t be too difficult to kill but just try not to get trapped. Once you’ve defeated them search the room for Milkreed, a 2 Brass Keys, a Skull and Throwing Axes. Use one of the Brass Keys to open the Gate and go through the Teleporter.

15. This area will at first look different than the map above. Once you place an item on all four of the Pressure Plates, shown with the red dots on the map, the central walls will lift up revealing Uggardians and Giant Spiders. Retreat back into the previous corridors to try and kill them one-by-one. Pull the Lever on the pillar to open the Wooden Door to the next area.

16. After killing the Giant Spider and Uggardians search the area for some small items, 2 Shurikens, Knife, Bread and Mole Jerky.

17. There are two Buttons that can open this secret. One on the pillar and the other on the wall to the north. Once one of them is pressed the walls will lift up revealing a Wooden Box with Throwing Axes and Crossbow Quarrels.

18. This is the room that you probably saw in the beginning but couldn’t get to. A Giant Spider is stepping on Pressure Plates and releasing Lightning Bolts. Kill the spider with ranged attacks and then press the two little Buttons on the walls to open the Gate leading to the Vault. You can also get to the other side of the pits by pulling the Lever to close one of the trapdoors. Dropping down one of the pits will take you to a small area on level 9 with a Giant Snail with some Throwing Axes and Pitroot Bread.

19. Finally you have made it to The Vault. This is a secret although on the map I have it as the wrong color. Notice the Daemon Statues on the walls. They will shoot Lightning Bolts repeatedly if you try to pick up the sword from the altar. First place another item on the altar and then you can pick up The Dismantler.

20. Press the little Button on one of the walls to open up an alcove with the fifth treasure, the Golden Dragon. Make your way back to the stairs leading down, S2. You can use a Lever to open one of the Gates to take you straight back to the beginning of the level.

21. Use the Gear Key, found at #10, to open the Iron Door. Inside you’ll find Frost Quarrels and the Helmet of Valor.