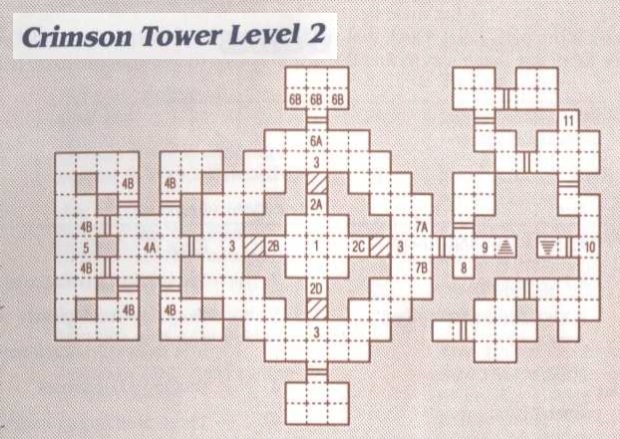 This is the final level of Eye of the Beholder 2 and where you’ll face Dran Draggore for the final battle. Before you reach him you’ll need to get past many Salamanders and Mind Flayers. Salamanders are fire-based creatures so use cold spells to defeat them. Mind Flayers are almost completely immune to magic. They also have a psionic attack that paralyzes the party. Hit them once of twice and then dodge out of the way.

1) You’ll enter the level through a hole in the floor. When you arrive here the hole will close up. There’s no escape now.

2A-D) Illusionary walls surround the entrance room. When you go through any one of them all of them disappear and the Salamanders behind them attack.

3) Salamanders wait at each of these locations. When you go through one of the illusionary walls at 2A-D they will all attack.

4A-B) When you step at 4A the door behind you closes and the other doors open, releasing two Mind Flayers at each 4B locations.

5) There is a large Crystal Ball set in the floor. When you look at it you’ll see visions of the past and future.

6A-B) When you step at 6A the door to the north opens, releasing Salamanders from 6B.

8) One of Dran’s servants lies dying on the floor. He warns you against seeing Dran as he’s in a foul mood. He’ll soon die in a puff of smoke. A Stone Cross Portal Key is also on the floor.

10) When you walk up the stairs here the door will close behind you, cutting off your exit.

11) Dran Draggore. Rest and save the game before you approach him. If you have the Starfire Scepter make sure you ready it in one of your characters hands. Using it will give you some protection from Dran’s fire attacks. Once Dran has taken enough damage he’ll turn into a dragon! Keep moving to dodge his powerful attacks and hit him with everything you’ve got!