After the fight in the bathhouse with Junior’s thugs talk to Dijkstra and ask him about Dandelion. He’ll ask you for a favour and lead you to his underground hideout where a Troll is guarding an empty vault. There’s a large hole in the wall leading out to the sewers. Someone has stolen all of his valuables. 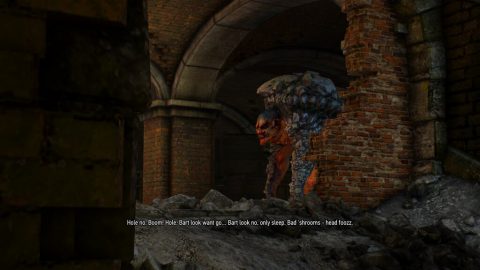 Dijkstra will give you 3 bottles of Pop’s Mold Antidote so you can explore the sewers. One bottle should last you long enough to explore the entire sewer area but you’ll also be given the formula just in case.

You can talk to the Troll but he doesn’t have much to say about what happened except that he heard a hissing sound.

Use your Witcher senses and investigate the wall where the explosion happened and the sewers. Along the way you’ll run into some Drowners around a couple of dead bodies. Kill the Drowners and burn the bodies so more of them don’t come back.

Continue all the way through the sewers to the end and look for notable items. At the end Geralt will conclude that Dandelion must have had a boat ready at the end of the tunnel to take the gold away.

Once you’ve explored everything make your way back to Dijkstra and tell him what you’ve discovered. You will then go with Dijsktra to investigate the pools. A bomb must have been dropped down one of the drains which then exploded in the wall between the sewers and the vault.

In one of the pools Geralt will notice oil on the surface of the water and a silver lid behind the pool. Dijkstra will call over Happen who will check the logs to find out who was using that pool. Apparently it was a man named Margrave Henckel although he died a few months back.

Make your way to Henckel’s house to look for clues. Upstairs you’ll find a Note and Wine Bottle on the table. Head to the other room and interact with the Wine Rack to open a secret area. go inside and read the Letter by the window. Geralt will learn that Ciri took part in the heist as did a Doppler called Dudu. Dandelion was also involved but was then caught by Caleb Menge. You’ll also find a Bomb on the table and notes on how to craft it.

While you’re exploring you’ll hear footsteps downstairs. Head downstairs to find Triss and Dijkstra. You can flirt with Triss a little, otherwise Dijsktra will coerce the two of you to find his gold. Triss tells you that she’ll meet you at the Eternal Fire Shrine at midnight.

At midnight go to the location marked on your map and Triss will tell you of her plan. There’s no way to sneak into the fort so you’re to put a pair of fake Dimetrium Shackles on her and bring her to the Witch Hunters. The way this turns out will depend on your choices during this event.

The guards will take Triss and threaten to torture her. If you insult the guards or threaten them a fight will break out and you won’t get to talk to Menge. It’s a big fight with lots of Witch Hunters so make sure you’re prepared. After the fight you’ll need to hunt around for a note giving you the location of Dandelion but you won’t know what happened to the treasure.

If you get through the conversation without starting a fight Menge will take you to the room next door to find out why it went quiet. Triss will attack and kill Menge when he enters. You can then search Menge’s desk for a Spy Note and Key for Dijkstra.

Leave the building through one of the upstairs locked doors. You should have found a key for it. Walk down the stairs outside and Triss will set fire to the place before teleporting away. Climb onto the roof of the shed and then over the wall to the other side. You’ll need to use Aard on one of the walls to make your escape. 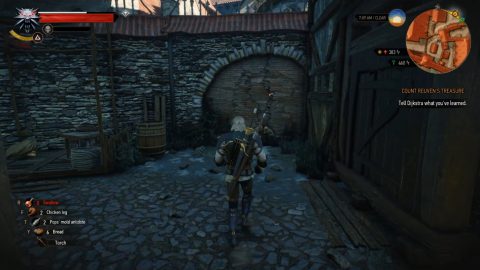 Once you’re outside of the compound you’ll be approached by a man who tells you Dijkstra wants to see you. Go back and see him.

Use the map marker to make your way to the dropbox. From here you’ll need to head to the house in Farcorners where the spy can be found. Use the map marker to find it and find a hiding spot where you can wait until midnight. When the spy enters Triss will hold him in a spell. 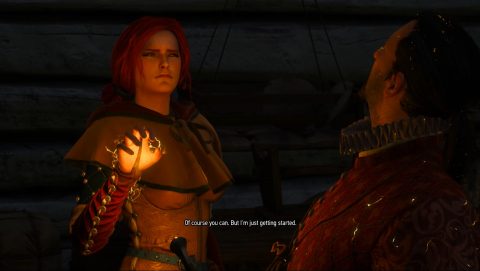 He’ll reveal who he works for and where Dandelion is being held. Afterwards you have a timed reaction to either kill him or wipe his memory. Talk to Triss and then head back to see Priscilla to complete the quest.