Ugly Baby begins once you complete all the main quests for In Ciri’s Footsteps. The trail will lead you back to Uma, who was last seen in Crow’s Perch. This quest includes four subquests, Disturbance, To Bait a Forktail…, The Final Trial and No Place Like Home.

Return to Crow’s Perch and speak to Sergeant Ardal who’s now in command. Tell him you’re taking Uma and eventually he’ll give in and direct you to the Stablemaster. Once you have Uma with you Nilfgaardian Soldiers will stop you along the road and take you to see Emperor Emhyr.

Yennefer will also be there and you’ll give an update on how things are going. He’s not happy that you haven’t found Ciri yet but still gives you half of the agreed reward of 2000 Crowns. Afterwards you’ll travel with Uma to Kaer Morhen. 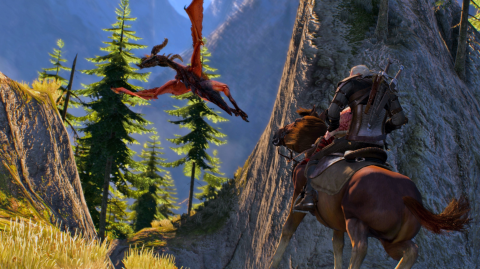 Vesemir will greet you and you’ll get up to date on what’s been happening. Apparently Yen isn’t happy and threw a bed out of the tower window. You can go up to see her if you want. You can even go around the outside to find the broken bed. If you want to romance Triss use your Witcher senses to find one of her Earrings which you can give to her later.

From here you can pick up any of the three quests, Disturbance, To Bait a Forktail… and The Final Trial. You can do them in any order although doing Disturbance first sets the scene for the others. Once those three have been completed you’ll move on to No Place Like Home and Va Fail, Elaine.

Once Uma’s Curse has been lifted you’ll have directions on where to find Ciri and this quest will end.

Back: A Mysterious Passenger          Next: Disturbance