Chapter 1: Where in the Blazes am I?

Chapter 1: Where in blazes am I?

When the cut-scene ends pick up the piece of cloth that got caught on the cactus. Walk to the north and enter the cave. Pick up the clay pots one-by-one. The first three will break but the fourth you’ll be able to pick up. Pick up the basket from the ground and look at it more closely by clicking on the eye with it. Open the picnic basket and spin it around until you can see the corn kernel. Take the corn kernel and exit the cave.

Have a look at the symbols outside the cave. They’ll give you a clue about how to empty the pool by the statue and you’ll need to know this later. Place the corn kernel on the spot on the ground where the water’s dripping. It’ll grow up instantly allowing you to grab a corn ear.

Enter the cave and come back out again. One of the purple flowers has opened up. Grab a gourd seed from inside the flower. Walk south and then west to the pool. Take the stick and the salt crystals in front of the pool.

Getting Fresh Water – First use your clay pot to collect some of the salty water from the pool. Click on the base of the statue to give you some clues as to how to proceed. Click on the head of the statue to turn it around so it displays the Sun god. Look at the collar and move the three beads so that all of them are on the spot three places from the left. 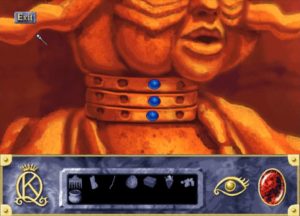 Now with the clay pot pour the salty water into the bowl. Place the corn ear in the left hand of the statue. Use the comb on Valanice so that she remember’s Rosella and cries. Now use the comb on the bowl of water. Valanice will cry into the bowl. Click on the head of the statue once more to turn it around. You’ll see a brief glow coming from the bowl of water. Scoop up the water in the bowl with the clay pot.

Head to the west and you’ll see a wandering ghost. Talk to him before he leaves the screen. Follow him down to the south and talk to him again. Give him the clay pot with fresh water. The ghost will take you to a corpse and give you a gift, either rope or a bug reducer. Take the bug reducing powder and then pick up the hunting horn from the corpse (the horn disappears if you take the rope).

The Temple – Walk to the north twice and then east to the entrance to the temple. Enter the temple and when you’re attacked by the giant scorpion use the bug reducing powder on it to bring it down to size. Take a look at the altar and click on the upside down teardrop underneath the monkey on the front side. Three gems will appear. You’ll need to arrange the gems in order to reveal a secret turquoise piece. 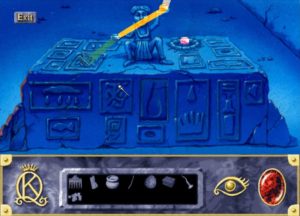 Place the blue gem in the right hand, the yellow gem in the left hand and the pink gem in the center of the sun symbol as shown above. Take the turquoise piece and leave the temple.

Knock on the ‘Rare Curiosities’ door again and give the glasses to Kangaroo Rat. Give him the gourd seed and he’ll trade it for a turquoise bead.

Walk back up the steps and head north. Use the stick on the prickly pear to knock it loose and pick it up.

Take a closer look at the arrow just above the closed door in the statues face. Place the arrow symbol in the empty arrow slot. The door will open. Go through it to end the chapter.

Alternatives – Instead of taking the bug reducing powder from the ghost wanderer you can take the rope instead. Use the rope in the starting location to attach it between two cacti. This will trip up the Jackalope and he’ll leave behind the glasses and fur.

If you take the rope instead of the bug reducing powder the giant scorpion can be beaten by combining the ripped cloth and the stick together to make a flag. Use the flag on the scorpion and he’ll get stuck with his stinger in the wall.

Chapter 2: A Troll is as a Troll Does