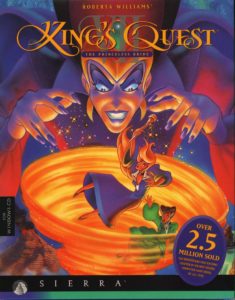 King’s Quest 7: The Princeless Bride is a story of Princess Rosella and her Queen Valanice who are trapped in the land known as Eldritch. They must find each other, defeat the evil Lady Malicia and find a way back home to Daventry.

King’s Quest 7 follows along in the same theme as the previous adventure games but uses cartoon graphics and is divided into chapters. There are multiple paths in the game and different ways to complete each chapter.

Below you’ll find a full walkthrough of all 6 chapters with video walkthroughs of each part. I’ll try to include written descriptions of all of the alternative paths as well. If I’ve missed something out don’t hesitate to contact me and let me know.

Chapter 1 – Where in the Blazes am I?

Chapter 2 – A Troll is as a Troll Does

Chapter 3 – The Sky is Falling!

Chapter 4 – Will the Real Troll King Please Stand Up

King’s Quest 7 was first released in 1994 by Sierra On-Online for Windows, DOS and the Macintosh. As with the previous King’s Quest games Roberta Williams was the designer along with Lorelei Shannon. King’s Quest 7 tried to incorporate Disney-style cartoon graphics into the game. The backgrounds were hand drawn and then scanned into a computer. Apparently the original game was much longer but was shortened to be able to fit onto a single CD.

When the game was released some reviewers criticised the cartoon graphics. Others thought they were stunning. Due to the immense popularity of King’s Quest 6 hopes were high that King’s Quest 7 could keep up to the same standard. Some gamers felt let down by this latest release and didn’t appreciate the different graphical style. Either way King’s Quest 7 is a solid adventure game that’s still sold and played to this day.